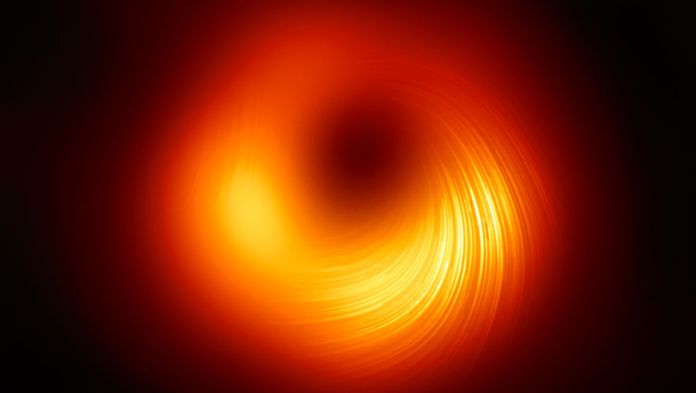 Large black holes are often referred to as the vacuum cleaners of space, collecting everything that comes too close to them. That is only partly true. Because of the matter that disappears in the supermassive structures that were once very large stars, part of it can escape.
It flows back into space, astronomers speak of so-called jets. This beam of plasma is a mixture of glowing gas and matter. It often reaches considerable proportions, depending on how active a supermassive black hole is. The jet, pouring out of the core of the galaxy M87, a giant black hole, extends at least 100,000 light years into space. Much is still unclear about the origin of these jets. For example, where exactly they originate and how they are started. It is assumed that magnetic fields play a major role in this.
An international research team from the Event Horizon Telescope (EHT) has now presented data that should contribute more to the understanding of these cosmic torches. To this end, the collaboration, which presented the first image of a black hole in 2019, once again evaluated the data from its measurement campaign in a special way. They report on the result in two articles in the specialist magazine “The Astrophysical Journal Letters”.
In the spring of 2017, astronomers pointed eight radio telescopes around the world simultaneously at the center of the galaxy M87. By interconnecting the devices, they achieved a resolution large enough to image the supermassive black hole around 55 million light years away. The researchers have now polarized these radio signals in a complex process – in simple terms, one could say that they put glasses with a polarizing filter on the earth.

Because everyone knows such filters from sunglasses on a small scale. They ensure that irritating stray light in the form of reflections and glare does not disturb our eyes. Light is electromagnetic radiation that vibrates. “The polarization of the light carries information that enables us to better understand the physics behind the image,” quotes a message from the Max Planck Institute for Radio Astronomy in Bonn, quoting astronomer Monika Mościbrodzka from Radboud University in the Netherlands. The polarization enables astronomers to recognize in which direction the light is oscillating and can thus draw conclusions about the magnetic fields that are at work there.

The launch mechanism of the M87’s jet is hidden in a compact, manageable region and raises a plasma jet that is larger than the entire galaxy. “We were now able to actually see that the jet is being created directly at the black hole, a bit in front of the event horizon,” says Radboud Professor Heino Falcke. This is the area from which matter irretrievably falls into the gravitational monster.

Thanks to the polarization, the researchers now know something about the alignment of the magnetic fields involved in this mechanism. They are each perpendicular to the vibrations of the radio waves. These can be seen as bright, structured areas on the image and are turned like a screw: The light is twisted a bit when it penetrates the plasma. The entire ring is magnetized. The researchers were also able to measure the temperature of the jet. It is 100 billion degrees Celsius.

“It is amazing that the magnetic effect is so strong that it prevails against gravity,” says Falcke. The researchers suspect that the magnetic field, which is up to a hundred times stronger than that of Earth, even slows the rotation of the black hole. At the same time, this speed of rotation is probably used to shoot the plasma into space. But there is still no evidence of this, emphasizes Falcke. But the data would match their models well. But only a comparison with other measurements of this type can provide certainty.

Only the comparison brings more knowledge

There should still be in the future. Originally, the EHT researchers had planned to observe the black hole in our galaxy, Sagittarius A *. When the polarizations for the galactic center of the Milky Way are available and possibly other similar measurements, then the value of the current results will become apparent, the researchers hope. With Sagittarius A * in particular, however, there are doubts as to whether a jet will also be created there. This black hole, at just under four million solar masses, is much smaller than M87 (over six and a half billion solar masses) and more difficult to observe. It is also less active and hardly swallows up any matter. If Sagittarius A * has a jet, then it’s probably a lot smaller.

Just as with the image of the shadow of M87, the EHT researchers have chosen a complex process, which also explains the long time lag between the publications. Five different algorithms were used for polarization and the data from each telescope was checked individually to avoid errors.

The EHT collaboration consists of more than 300 researchers from various organizations and universities, including the Max Planck Institute for Radio Astronomy in Bonn. During the measurements, these scientists connected telescopes in Chile, Mexico, Hawaii, the USA, on Pico Veleta in Spain and from the South Pole to form a virtual observatory the size of the earth. They achieved a resolution of 20 micro-arc seconds deviation. This would make it possible to measure the length of a credit card on the surface of the moon.

Germans watched TV for almost four hours a day in 2020

EMA advocates the use of the corona vaccine

Schalke News: That is what Rangnick meant by “imponderables” | ...

After an attack in a residential building in Stuttgart: Rioters end...