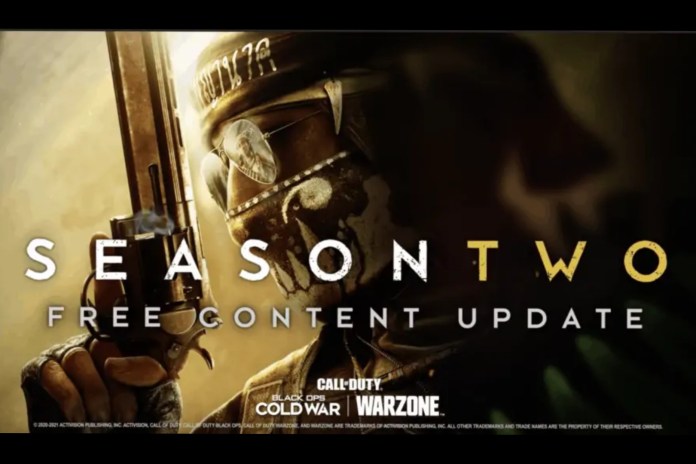 Black Ops Cold War is getting the Season 2 Reloaded Update soon. That’s the new content and the likely file size.

In the more recent Call of Duty Offshoots, the seasons are not published all at once. Instead, there is some content at the beginning of the season and the rest comes around the middle of the season – the whole thing is then called Season Reloaded. According to Gaming Intel it is sorely needed, because Cold War players are angry because Warzone and Zombies get so much attention. After all, Cold War has only got a new 6 vs 6 multiplayer map in Season 2 so far.

Here we have a contribution to the entire roadmap of season 2. In short, there is 4 new weapons, new multiplayer modes, new Kill series, new Maps as well as the Outbreak-Modus for zombies.

Apart from the picture on which we see the roadmap, the well-known leaker now has Tom Henderson published some information.

Probably what the developers promised us will come out. So the card „The Mansion“ for the 2vs2 and 3vs3 modes, the Head Card for “Dirty Bomb” that ZRG 20mm Sniper rifle and „Miami Strike“ for the 6vs6 multiplayer. The latter is probably to appease the players, due to the few, new maps. Again, the developers couldn’t be more uninspired.

The return of the R1 crossbow. Here we reported on why it was removed from the game. Since many players had already started the challenges to unlock it, it should be easier to get this time, according to Treyarch.

Furthermore, a new one is due to come soon Outbreak Card come. Their publication is still suspected in Season 2.

Of course, new patches are constantly being developed to improve the weapon balance. A patch is said to be in the works that will nerf the XM4, as it is currently considered too strong.

According to Tom Henderson, the developers are also working on Remastered Maps. This means that Cold War will get renewed multiplayer maps from the Black Ops series.

The file size for the update

According to the Playstation Game Size Twitter account, the PS5 update should be around 4.6 GB. It should behave similarly on other platforms. This brings the total size of the game to just under 119 GB.

Not much is known about the release date. It is suspected 25th March.

But as always: we should always approach leaks with caution. The information is not secured, even if many leaks turned out to be true in the end.

What do you think? Let us know!

Ed Sheeran turns 30: How the red-haired Brit rose to become...

These are the best Playstation deals for Black Friday weekend

The first of three Covid test centers is starting up in...