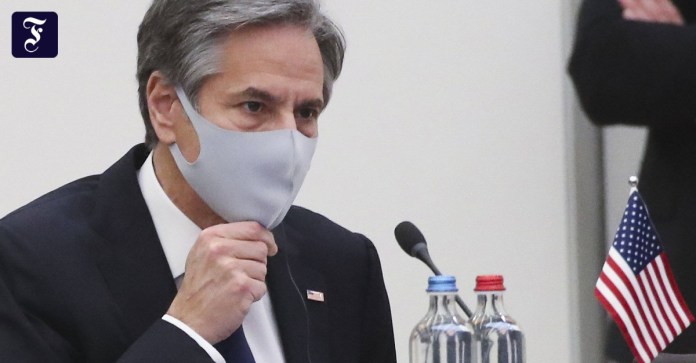 After the talks on Tuesday evening, spokesman Ned Price said on the sidelines of a NATO meeting in Brussels that Blinken had underscored the US’s determination to work with allies and partners to counter this intention by Moscow. In this context, he had reiterated the resistance to the gas pipeline. The Federal Foreign Office did not provide any information on Nord Stream 2 and spoke of a “very good exchange”.

Debates on how to deal with Russia

Before that, there had been an informal conversation between Blinken, Maas and their colleagues from France and Great Britain. The Foreign Office announced that the “trustful exchange” among the group of four was about Afghanistan, Yemen and Iran. In addition, the “NATO 2030” strategy process was a topic, which is also intended to initiate reforms for closer political cooperation between the allies.

British Foreign Minister Dominic Raab wrote on Twitter that the four NATO countries were standing together as a “positive force” to push for peace in Yemen and prevent Iran from becoming a nuclear power. However, there was initially no more detailed information on possible agreements between the four ministers.

The talks on Tuesday evening took place on the sidelines of the current meeting of NATO foreign ministers. Talks on how to deal with Russia are still pending with him this Wednesday.

Just a few hours before the conversation with Maas – which the US State Department described as “short” – Blinken had already made it clear that the United States wanted Nord Stream 2 to be stopped immediately and would not shy away from new sanctions against companies involved in the construction.

The United States’ demands on Nord Stream 2 are particularly explosive because the pipeline, with its two pipeline strings around 1,230 kilometers long, is already more than 90 percent complete. In the future, it should actually transport 55 billion cubic meters of natural gas per year from Russia to Germany.

The United States justified its rejection of the project on the grounds that, in its opinion, its European partners were too dependent on Russian gas and had already imposed sanctions on a company involved in the construction in January. Pipeline proponents accuse the United States of only wanting to sell their liquefied gas better in Europe.

So far, the federal government has ruled out political intervention to stop the project. In Berlin it is argued, among other things, that a policy that relies on economic isolation for Russia could harbor great dangers. In addition, a building ruin worth billions should be avoided. After completion, the operation could still be prohibited or conditions attached.

Jan Fleischhauer: In Germany there is a strange desire for lockdown

Reactions to new rules: “Orders are not enough” Schools – Stuttgart – Eisenmann: alternating lessons would be an existential...