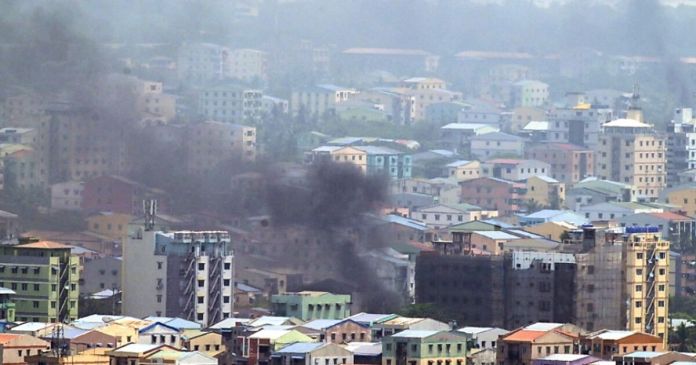 The new demonstrations took place on Army Day, which the military celebrated with a parade in the capital Naypyitaw. For this purpose, Russia and China, among others, sent representatives. The EU delegation in Myanmar said that the holiday this year will go down in history “as a day of terror and dishonor”. US Ambassador Thomas Vajda spoke of “terrible bloodshed” and said that the people of Myanmar had made it clear that they did not want to live under military rule.

The military initially did not respond to requests for comment on Saturday. Army chief Min Aung Hlaing said in a televised address: “The army wants to join forces with the whole nation to secure democracy.” Acts of violence that would impair stability and security are inappropriate. He repeated his promise to hold elections, but again did not give a date. The day before, there had been a threat against the demonstrators on state television. “You should learn that you run the risk of being shot in the head and back,” said MRTV.

According to diplomats, eight countries sent representatives to the parade – Russia, China, India, Pakistan, Bangladesh, Vietnam, Laos and Thailand. Deputy Defense Minister Alexander Fomin was present for the government in Moscow. “Russia is a true friend,” said Min Aung Hlaing. The support of the governments in Moscow and Beijing is particularly important for the army in Myanmar because both states have a right of veto in the UN Security Council. The USA and European countries, on the other hand, issued new sanctions last week.

Meanwhile, one of the more than 20 armed ethnic groups in Myanmar announced an attack on a military post on the border with Thailand. The Karen National Union said that ten people were killed and one of their own soldiers was lost. The military carried out air raids on a village in the area controlled by this ethnic group. According to a civil rights association, two people died. The military did not initially respond to these events either. Shan State Army commander, another militia, Yawd Serk, told Reuters in Thailand that minorities could interfere if the military continues. “If they keep shooting protesters and harassing people, I don’t think that all ethnic groups will just watch and do nothing.”

Historian Thant Myint-U warned of a collapse of the state on Twitter in the face of developments. “I don’t think the world is aware that a failed state in Myanmar has the potential to involve all of the major powers – including the US, China, India, Russia and Japan – in ways that lead to a serious international crisis could, “he wrote,” as well as an even greater disaster in Myanmar itself. ”

S-21 construction site along the A8: What is the purpose of...

Stuttgart: “Processes in connection with the state’s participation in the 2020...

School openings in Hamburg: union calls for a step-by-step plan |...