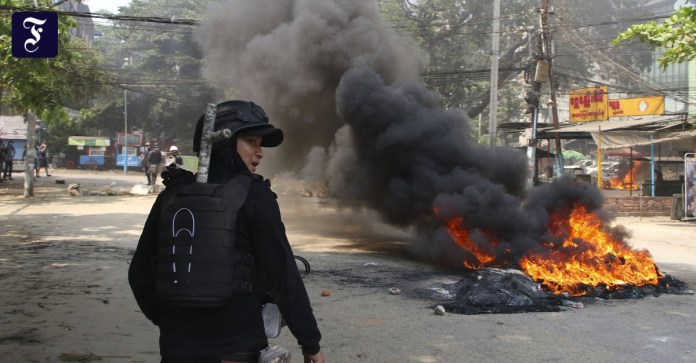 In Myanmar, the violent repression of the military regime against the street protests has escalated into the bloodiest escalation since the coup almost two months ago. According to media reports and eyewitnesses, security forces shot again on Saturday at demonstrating opponents of the regime in several cities in the country, killing at least 114 people, including children. In Mandalay in the center of the country alone, at least 40 people were killed, including a 13-year-old girl, reported the news portal Myanmar Now. At least 27 people were killed in the economic metropolis of Yangon.

The new demonstrations took place on Army Day, which the military celebrated with a parade in the capital Naypyitaw. For this purpose, Russia and China, among others, sent representatives. The EU delegation in Myanmar said the holiday this year will go down in history “as a day of terror and dishonor”. The American ambassador Thomas Vajda spoke of a “terrible bloodshed” and said that the people of Myanmar had made it clear that they did not want to live under military rule.

“Russia is a true friend”

The military initially did not respond to requests for comment on Saturday. Army chief Min Aung Hlaing said in a televised address: “The army wants to join forces with the whole nation to secure democracy.” Acts of violence that would affect stability and security are inappropriate. He repeated his promise to hold elections, but again did not give a date. The day before, there had been a threat against the demonstrators on state television. “You should learn that you run the risk of being shot in the head and back,” it said on the MRTV broadcaster.

According to diplomats, eight countries sent representatives to the parade – Russia, China, India, Pakistan, Bangladesh, Vietnam, Laos and Thailand. Deputy Defense Minister Alexander Fomin was present for the government in Moscow. “Russia is a true friend,” said Min Aung Hlaing. The support of the governments in Moscow and Beijing is particularly important for the army in Myanmar because both states have a right of veto in the UN Security Council. The United States and European countries, however, issued new sanctions last week.

Map shows results for 2020: Cars burn every night in Berlin...

Corona – Swedes do without a mask

German media confirm: FC Bayern will get Omar Richards on a...

New President of Intensive Care Medicine: “The numbers are right …

Wolfsburg: This shop is unbeatable – and has already won three...

Corona easing in Saxony: This will apply from tomorrow