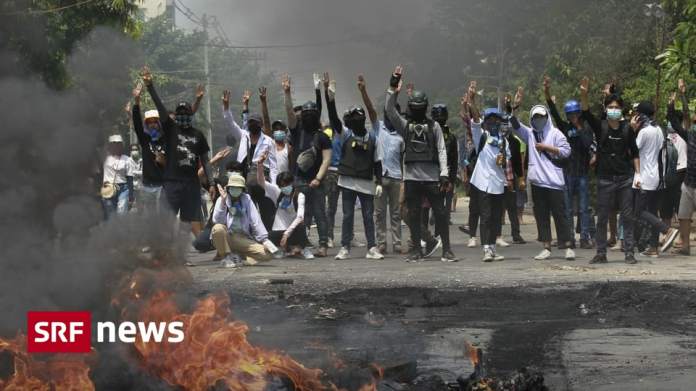 According to the United Nations, it is the “bloodiest day” since the coup in early February. “The violence is completely unacceptable and must stop immediately,” said a statement.

On the Army’s official memorial day, protests against the takeover of power broke out in large parts of the country, such as in the trading metropolis of Yangon, in the northern region of Mandalay and in southern Bago. Military members and police officers are said to have used live ammunition and targeted headshots against unarmed civilians.

Among the victims in Yangon is a 21-year-old civilian who was allegedly helping out in his family’s tea shop when he was shot. This said a family member of the German press agency. According to estimates by the prisoners’ aid organization AAPP, almost 3,070 people have been arrested so far. At least 328 were killed.

In a speech in the capital, Naypidaw, the Armed Forces Commander in Chief Min Aung Hlaing defended the military takeover as “inevitable” because the Suu Kyi government and its party were involved in “unlawful acts”. He promised to hold elections again, but without giving a date.

Fake clubhouse app for Android in circulation: Beware of malware

The euro has risen above 1.21 US dollars for the first...

Curiosities from the Landesgewerbemuseum: A question of good taste – Stuttgart