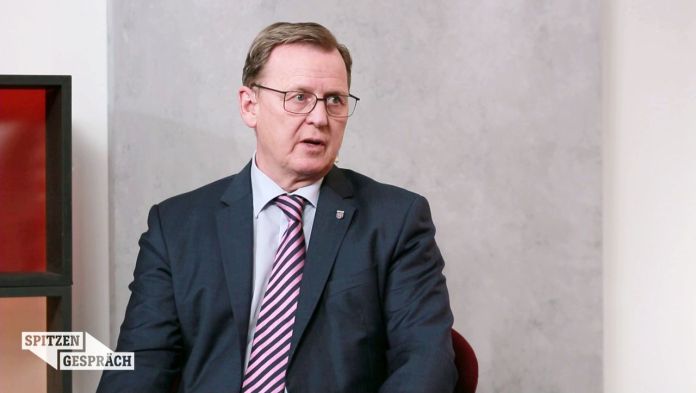 From the most recent round of prime ministers with Chancellor Angela Merkel, one thing is remembered above all: that after hours of negotiations in the middle of the night, the »Easter rest« was decided – only to be collected by Merkel the next day. In the group of country leaders there is at least one who finds it a shame that the decision was not implemented: Thuringia’s Prime Minister Bodo Ramelow (left).
“I regretted that there was no Easter rest,” said Ramelow in the SPIEGEL top-level conversation with moderator Markus Feldenkirchen. It “should have interrupted the dynamic increase in infections,” said Ramelow. Nothing has changed about this increase so far.
Above all, however, Ramelow criticizes the culture of discussion in the group, which has become a symbol of a messed up corona policy. Specifically, Ramelow was dissatisfied with the course of the most recent video conference from Monday afternoon to early Tuesday morning. “The Chancellor said I needed a 15-minute break, and that was the last I heard from her.” The short break in the early evening was supposed to last around six hours.
He didn’t find out about the Easter rest until late at night, before that there was “not even a hint,” said Ramelow. “Obviously there had been negotiations for hours.” However, not all prime ministers had been initiated into these. “I didn’t know where the Chancellor was for six hours. What kind of situation is that? «, Says Ramelow. “We cannot repeat such conferences in this form.”
Ramelow believes it was a mistake to negotiate until well after midnight, only to then reach a half-baked decision. “We should have interrupted the federal-state round.” The “Easter rest” should have been properly prepared and legally dealt with the next day. “The federal government could not submit a proposal because the 16 federal states would have had to implement it through regulations,” said Ramelow.
During the long break at the video conference, he had posted a tweet that consisted only of numerous “Ä” – a reference to a tweet from his colleague Reiner Haseloff, who had recently accidentally tweeted a single “Ä”.

Ramelow cannot understand the excitement surrounding his tweet. “I tweeted something meaningless in a meaningless situation.” The next time it should be different. Ramelow said he will “no longer tweet As, I’ll tweet Us”.

In a comparison of the federal states, Thuringia is one of the regions hardest hit by the corona crisis. Nevertheless, Ramelow said that in a European comparison, Germany is currently doing well with regard to the pandemic. Germany does not have the same medical situation as the Czech Republic or Slovakia. “The pandemic defense – with all the details that may be wrong – is still working well,” said Ramelow, “protecting citizens is the top priority.”
The Prime Minister also spoke about the Union’s mask affair. This is “easy to pull out your hair.” He finds it “outrageous” that someone is doing private business in this situation. Ramelow especially mentioned the politician Mark Hauptmann (read more about the allegations against Hauptmann here). Ramelow said the captain – who has since resigned his parliamentary mandate and left the CDU – was the one who called for his resignation.

Ramelow had previously admitted to occasionally playing the game “Candy Crush” on the mobile phone during important corona crisis meetings. At the time, the accusation was that Ramelow was not involved when politics were discussing coronavirus deaths and restrictions on freedom. He had “never made a secret of the game,” said Ramelow. And now he is being “knocked out”.

Weather in Germany: Warmth mountain sweeps the cold whip away

Real Madrid at Shakhtar – the “royal dance” between disaster and...

Heavy snowfall and wind increase the risk of avalanches