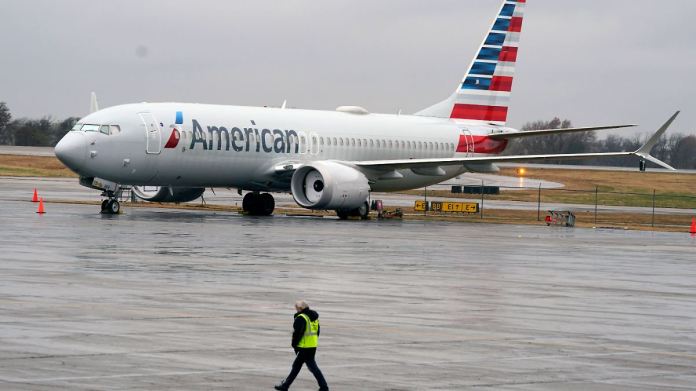 In the USA there are again problems with a Boeing 737 Max. As a precaution, the pilot switches off an engine and brings the machine down safely. According to the airline concerned, the problem has nothing to do with the two crashes two years ago.
An American Airlines Boeing 737 Max landed safely at the destination airport in Newark following an emergency report due to a technical problem. As the airline announced, the captain of the machine had switched off an engine due to possible technical problems. All 95 passengers and the crew are doing well. The company said the potential technical problem occurred with an oil pressure or volume indicator on the engine.

It has nothing to do with the MCAS system that has been linked to two fatal 737 Max crashes in 2018 and 2019. Aircraft manufacturer Boeing said the company was informed about the incident. The Federal Aviation Administration (FAA) wants to investigate the case. Many passenger planes are designed in such a way that they can continue to fly with one engine.

American Air was the first US airline to resume its 737 Max flights late last year after the FAA re-approved the type of aircraft. At the time, FAA chief Steve Dickson said the machine was safe, but mechanical problems could occur with any aircraft. “It is inevitable that at some point in the future a Boeing 737 Max will have to return to its departure airport, be rerouted, or land at its destination with an actual or suspected problem.”

The successful Boeing 737 Max model was taken out of service in March 2019 after two crashes with a total of 346 deaths in Indonesia and Ethiopia. Problems with the control system were considered to be the cause of the accident. The US aviation authority had approved flight operations again in mid-November after software updates and with conditions such as pilot training.

In Europe, the planes have been allowed to start again since January, more than 22 months after the start of the flight ban. On this side of the Atlantic, for example, Ryanair, the continent’s largest airline, relies fully on what was once Boeing’s best-selling model. Company boss Michael O’Leary even spoke of a “game changer” because the machine can take 4 percent more passengers, but uses 16 percent less kerosene. The company recently ordered 75 more copies of the short-haul jet. Lufthansa mainly uses Airbus aircraft and does not have a 737 Max in its fleet.

At the Super Bowl he was promoting Jeep: Bruce Springsteen caught...

After extra time: LASK defeats WAC and is in the cup...

Snow chaos on the A2: drivers spend night in traffic jams

France: outrage after serious injury to a photographer