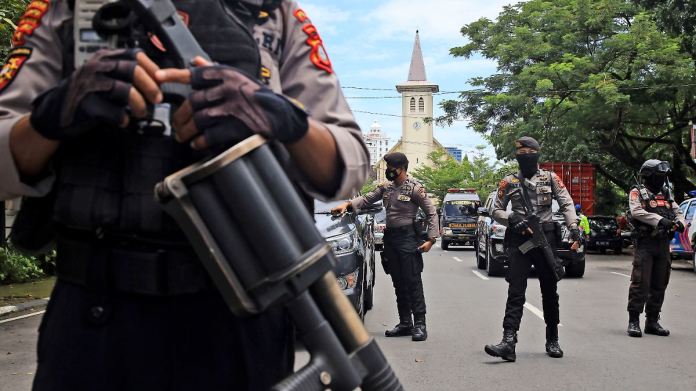 Attackers are apparently once again carrying out an attack on the Christian minority in Indonesia. On the island of Sulawesi, a bomb “of high explosive power” detonated after a church service. Two suspects had previously tried to break into the church on a motorcycle.
A suspected suicide bomber was killed in an attack on a cathedral on the Indonesian island of Sulawesi. According to the police, 14 people were injured. “The body we found on site is believed to have come from the suicide bomber,” said the local police chief. The explosive device itself was said to be “highly explosive”.

The station Kompas TV had previously speculated about a possible suicide attack. Numerous ambulances and special police units arrived at the scene of the accident. A spokesman for the national police said two suspects tried to get through the gate of the cathedral in the city of Makassar on a motorcycle. Security forces stopped them.

The service was over and visitors had come from the church, he said. Among the injured were three church security guards, and according to the local police chief, several people were attending the church service. The exact background of the attack is not yet known.

An Indonesian Muslim council condemned the attack as a heinous act that violated the principles of any religion. A Christian association called on members to stay calm and not be afraid. Of the approximately 270 million inhabitants of Indonesia, almost 87 percent are Muslims and around ten percent are Christians.

What does this mean for travel?