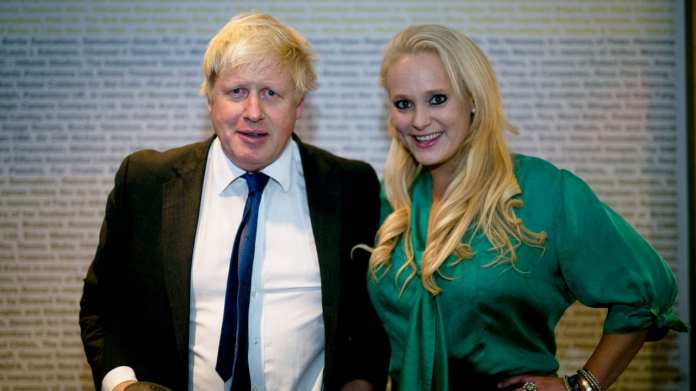 So far it has been more rumors: British Prime Minister Boris Johnson (56) is said to have had a sex affair with US businesswoman (and ex-model) Jennifer Arcuri (36) as Mayor of London (BILD reported). It was known that the two knew each other well – but they had never confirmed the sexual relationship.

Until now! Arcuri has admitted the relationship – in a long interview with the Sunday edition of the British newspaper “Mirror“.

A political earthquake at 10 Downing Street, the seat of the UK Prime Minister. There they declined to comment on the interview.

The romance is said to have lasted four years: from 2012 to 2016. Johnson was London’s mayor at the time – and married to ex-wife Marina, with whom he has four children.

In the interview, Arcuri revealed spicy details (see below in the text). She says they met once a week at the height of the affair. She also sent him topless pictures and said, “I loved him. I adored him. ”The“ physical and intellectual attraction ”was mutual.

But in the end, she says, Johnson was a “cowardly wet noodle”. Reason: He was not in line with her on foreign trade trips.

Johnson under pressure over affair

Politically, the interview is highly explosive! Johnson is accused of having given Arcuri advantages through his office.

Some time ago it was alleged that Arcuri was allowed to complete taxpayer-funded high-level trade missions under the direction of Johnson. And that although their companies did not meet the criteria for the trips (BILD reported).

Another allegation: Boris spoke at some events organized by Arcuri. She then reportedly received £ 126,000 in taxpayers’ money for sponsorship and event grants.
Johnson is said to have kept quiet about his relationship with Arcuri.

The revelations are of enormous importance to Johnson. Because: You throw off questions about his handling of tax revenues – and about whether Johnson has violated British policy rules: the so-called “Nolan Principles”. This is now investigating the Greater London Authority, which is responsible for the mayor’s office.

But: The Independent Bureau of Police Conduct says so far that there is no evidence that he committed the crime of misconduct in public office.

Arcuri’s Revelations: This is what the four-year relationship looked like

▶ ︎ They shared the love Shakespeare – and talked about the playwright as often as they did about sex. Arcuri says they recited Sonnet 29 together, which begins: “If you fall from grace with the happiness and eyes of men …”

▶ ︎ Arcuri named him Alexander the Great – and has saved his number under Alex the Great, since his real first name is not Boris, but Alexander.

▶ ︎ You sent him Topless pictures – whenever Johnson said he really wanted to see her. So she sent him an “artistic” picture that Johnson is said to have said was “enough to have a bishop step through a stained glass window.”

▶ ︎ He loved hers body and soul and “couldn’t keep his hands off me,” says Arcuri. According to Arcuri, Johnson is said to have said: “You are the most beautiful woman, I can’t stop thinking about you, but I love hearing what you have to say. Of course I love your body, your face and your breasts, but you are a very smart woman. ”

▶ ︎ Johnson drank and ate openly with Arcuri in one, according to Arcuri London Restaurant – although he had a family. And he told her: “I want to go out with you! You are the only American I have ever imagined. ”

▶ ︎ About Sex says Arcuri: “We were in an intimate relationship for four years. I loved him and for good reason. But the man I thought I knew no longer exists. “

That’s how the two met

▶ ︎ Arcuri was a business student when she met Johnson at an event he was speaking at in 2011. She says: “He came into the room with me disheveled hair. That’s when I saw Boris Johnson’s first real magic. ”

▶ ︎ Back then (2011) there would have been a lot of screaming schoolgirls. Arcuri went to him and said:Hi my name is jennifer‘If you don’t know me, you do it now.’

▶ Months later, she volunteered to promote him when he was re-elected Mayor of London in 2012. They met again in the so-called Boris Bus – and he remembered her. They exchanged the numbers. The reason: He wanted to register for an event held by her then young company “Innotech”. However, it sparked.

▶ Johnson observed her at a campaign event, sent a text message in which he wrote: “You look great.“

▶ Weeks before the Innotech event, Johnson Arcuri is said to have written an SMS and asked a Drink asked.

▶ The romance unfolded shortly before the Olympic and Paralympic Games in London.

The first sex: She found his sock and threw him out

▶ Arcuri says she first slept with Johnson on August 29, 2012 – the day of the Paralympics ceremony. She says he’s in her mayor’s suit in her apartment on London’s trendy Shoreditch High Street showed up with Olympic badges.

▶ “I had the full one control. I could tell that this man was so excited to see me. It gave me the upper hand. ”

▶ After sex, she said Johnson didn’t want to go and she had to push him out the door. But first she had to find his sock. Because: He had to go to the ceremony: “It was uncomfortable – you should be on stage and on television in a few hours.”

That evening, 11 million people attended the opening ceremony of the Paralympics, where Johnson was pictured alongside Princess Anne, Prince William and his wife Kate.

The end of the relationship

▶ She says she refused to put her life and family plans for Johnson on hold: “I earned more.” But she also says, “I have him adored and would lie to say that I wanted there to be a time when he is not in my life. “

Recovery attempt after setback at the start of the week

Smartphone with Google apps is reduced

“The family is deeply concerned”

“Hard and warm”: Elvis reveals – the documentary from the Benz...

BlackRock manager sees Bitcoin ahead of gold in the long term...