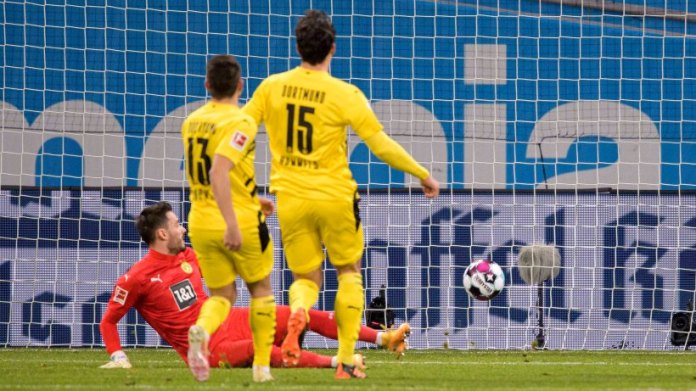 Borussia Dortmund: It was rumored for a long time – now it’s out!

Dortmund. The December crisis of Borussia Dortmund not only cost Lucien Favre the job, it also sparked a goalkeeper discussion.

Since then it has been rumored Borussia Dortmund could be looking for a new number 1 in the transfer market. Now it is clear: the persistent rumor is true!

Roman Bürki had come under increasing criticism this season. Too many unfortunate actions and an injury at the wrong time cost him his regular seat. Under Favre’s successor Edin Terzic, the former substitute keeper Marwin Hitz has been in the box since the end of January.

Because the compatriot of the Swiss national goalkeeper Bürki did not look good at the beginning either and at 33 years old is not a long-term alternative, many suspected that Dortmund could become active in goalkeeping in the summer.

+++ Borussia Dortmund: bad news! Unlucky person has been out for months +++

Now the rumor has become a certainty. For the first time, an advisor to a goalkeeper confirmed an interest from Borussia Dortmund – and with it that Bürki’s time between the BVB posts is finally running out after six years.

Borussia Dortmund: deadline is shaky! Does this BVB game have to be postponed?

Marco Reus: Striking detail on the BVB star – will he soon be wearing THAT in every game?

The potential new goalkeeper is Bartlomiej Dragowski. The Pole, who is only known to experts in Germany, recently made a name for himself in the Italian Serie A and thus played himself on Michael Zorc’s list.

BVB interested in Dragowski? Consultant: “Yes, I can confirm that”

When asked about a BVB interest, his advisor Mariusz Kulesza told the “FirenzeViola.it” portal: “Yes, I can confirm that. I am of course very happy that big clubs that play in the Champions League are up to Dragowski. “

His Fiorentina plays an average season at best, but it’s not Dragowski’s fault. The goalkeeper convinced the team of Bayern legend Franck Ribery – and at the age of 23 is still a young goalkeeper.

It is still unclear whether he will succeed Roman Bürki. One thing is certain, however: Borussia Dortmund wants a new goalkeeper.

Which PS4 games do players want?

For the public sector: Berlin is planning a 35 percent migrant...