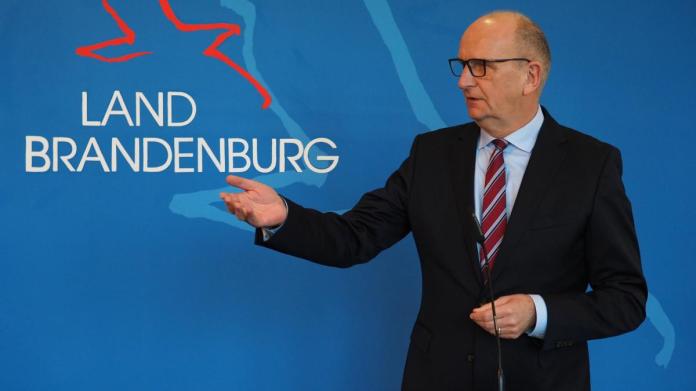 Germany For seven-day incidence over 100

The Brandenburg cabinet set a nocturnal exit restriction on Tuesday for the period from April 1st to April 6th as a tightening of the existing “emergency brake”. It is valid from 10 p.m. to 5 a.m.

Brandenburg is introducing a nocturnal exit restriction over Easter in view of the significantly increasing number of corona infections. The cabinet decided on Tuesday in Potsdam that the existing “emergency brake” in a district or an independent city would be supplemented by an exit restriction from Maundy Thursday to Tuesday after Easter, and thus tightened. The curfew is to apply from April 1st to 6th from 10pm to 5am. The condition is a regional seven-day incidence of 100 or more for three days in a row.

Prime Minister Dietmar Woidke (SPD) spoke of a serious decision, but the country had to react to the infection. Minister of the Interior Michael Stübgen (CDU) announced that the public order office and the police would go on patrol together to check compliance with the exit restrictions.

The emergency brake applies at a seven-day incidence – i.e. a value of new infections per 100,000 inhabitants in one week – of over 100 on three consecutive days. However, openings should be possible with low numbers. This mark has already been exceeded in most counties.

The federal and state governments have agreed an emergency brake – nationally or regionally – if the value of new infections per 100,000 inhabitants in a week for three days in a row in a district or urban district is over 100. Then the recent easing will be reversed. Brandenburg does not have a nationwide, but a regional emergency brake.

After three days with high values ​​for the seven-day incidence, the state capital Potsdam pulled the emergency brake on easing. The country’s containment ordinance will apply from Wednesday, the retail trade will have to close, the city announced on Tuesday. The Brandenburg cabinet discussed the updated containment ordinance on Tuesday, which will be announced.

On Tuesday, the incidence value in Potsdam rose above the critical value of 100 new corona infections within seven days per 100,000 inhabitants for the third day in a row. Shops for everyday goods such as supermarkets, drug stores, bakeries and pharmacies are excluded from the closure. Museums and memorials will also be closed from Wednesday. The regulations apply until at least April 13th.

The seven-day incidence has continued to rise across the country. The number of new infections per 100,000 inhabitants in one week was 145.4 on Tuesday, as the Ministry of Health announced. Only the district of Uckermark is below the 100 mark with a value of 65.6. The Elbe-Elster district remains the corona hotspot with a seven-day incidence of 256.3 – but with a downward trend.

Nationwide, the health authorities counted 317 new corona cases. Twelve deaths were added on Tuesday. A week ago there were 201 new infections and 11 new deaths.

Joseph Rushmore on US Capitol Assault: “People told me to my...

Corona variants – British variant in Geneva in 60 percent of...

Bundesliga: Bayern win despite being outnumbered against Stuttgart – BVB fail