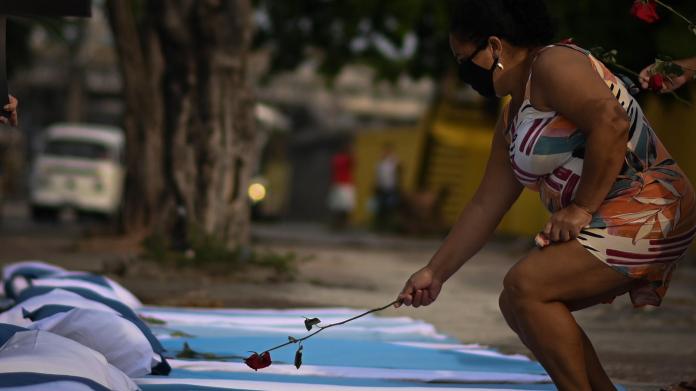 More than 300,000 people died from the Brazil mutation

Brazil’s health system is on the verge of collapse. After the USA, it is the country most severely affected by the corona pandemic. More than twelve million people have been infected and more than 300,000 have already died. The protests against President Bolsonaro are growing louder. The cause: The presumably highly contagious virus variant P.1 continues to spread. At the same time, the vaccination campaign is facing major problems. And an increasingly unpredictable president even wants to overturn existing corona measures in the midst of all the chaos. In view of all this, researchers are already warning of Brazil as a global threat.

+++ You can find all current information on the coronavirus in our live ticker on RTL.de +++

Corona: Younger people in particular are affected by variant P.1

Virus variant P.1, which probably originated in Manaus in the Amazon region and is now spreading in Brazil, is of particular concern. It is also known as B.1.1.28 or 20J / 501Y.V3. According to an analysis by the Brazilian health organization Fiocruz, it already made up half of the new cases in eight states in early March.

The variant has now also been found in many other countries, including Germany. It doesn’t have to be more deadly. According to a study, the vaccines from Biontech / Pfizer and Astrazeneca work better against them than initially thought. But because of the many infected people, the hospitals are full. In some places, patients can hardly be cared for. Brazil’s health system is about to collapse – or has already collapsed in many places.

Not only is the remote Amazon metropolis affected, but also the south and southeast: São Paulo, Brazil’s richest city, and the state of Rio Grande do Sulvon, which was shaped by German immigrants. The situation in intensive care units is in “critical condition” in 24 out of 26 states and in the capital district of Brasília. Hundreds are waiting for a bed or dying in line. There is a lack of medication and oxygen. Younger people are particularly affected.

Bolsonaro continues to downplay the situation

The problem: Brazil is currently worse positioned than almost any other country in the fight against the pandemic. With the right-wing populist Jair Bolsonaro, a president rules who is constantly playing down the corona virus. Most recently, Bolsonaro even wanted to overturn measures taken by some states to contain the virus – such as restrictions on freedom of movement. Reason: The governors lack the competence to make these decisions.

Bolsonaro also doubts vaccination and torpedoes the purchase or production of vaccines. The nationwide vaccination campaign only started in January and had to be interrupted again and again because there was no vaccine. More than ten million people have now been vaccinated in Brazil, but the country has a population of 210 million.

Brazil Mutation Expert: We are all in danger

The virus variant P.1 brings with it, among other things, two dangerous adaptations: the N501Y and the E484K mutation. According to a study, it is said to be up to 152 percent more contagious than the original variant of Sars-CoV-2 – and thus even put variant B.1.1.7 in the shade, which is currently rampant in Europe. Mutations could also make it possible for P.1 to successfully evade the immune defense of those who have recovered, as another study by Brazilian and British researchers has found evidence of. Eric Feigl-Ding, epidemiologist and health economist for the Federation of American Scientists, warned on Twitter: “If the more contagious P.1 [Virus] out of control worldwide, we are all at risk. “

The corona virus has kept the world in suspense for months. On TVNOW you can now find exciting documentation on the origins, spread and consequences of the pandemic.

Good to know: Registration for antigen tests in Tyrol possible from...

More than 100 shots by police officers during operations last year...