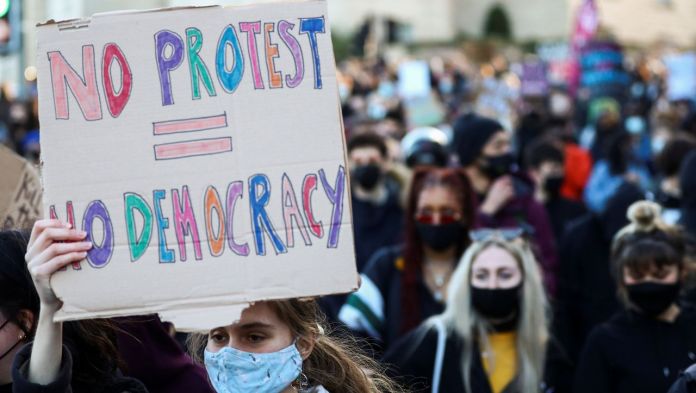 At least ten people were arrested during protests against a controversial police law in the western English city of Bristol. Protesters had attacked the emergency services with bottles, bricks and eggs, the police said on Saturday night.
Prime Minister Boris Johnson condemned the violence of the protesters: the attacks on police officers were “shameful,” he said. Fireworks were thrown at mounted officers and a police horse was sprayed with paint.
Within a week it was the third demonstration that resulted in violence. More than 1000 people protested peacefully on Friday afternoon, the police said. Several hundred people then moved towards a police station that was attacked during protests on Sunday. When the police tried to break up the crowd, the situation escalated.

The protest under the motto “Kill the Bill” is directed against the draft of a new police law. It is intended to give the police far-reaching powers to deal with peaceful demonstrations. Among other things, demos should be able to be restricted if they represent a noise nuisance, for example. Critics see the proposed law as an attack on freedom of assembly.

Heer says how it will crack down on mass tests –...

NRW imposes a stop on the corona vaccination in clinics

Migration – 5 years of the EU-Turkey deal: a fragile agreement