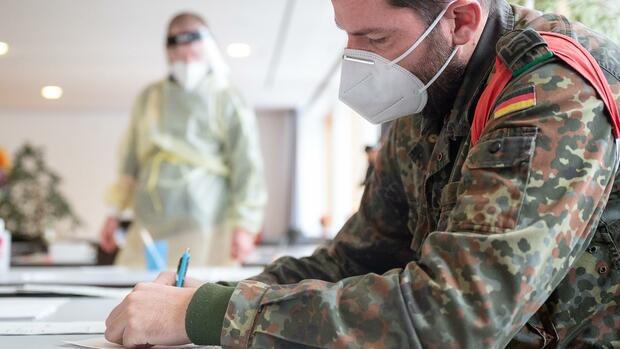 Before Christmas, Chancellor Angela Merkel and the state leaders called for the Bundeswehr to use the administrative assistance.

Berlin After exactly one year in the Corona aid mission, Federal Armed Forces Inspector Martin Schelleis calls for a lesson from the pandemic to significantly strengthen civil disaster control. “We need stronger civil protection not only in the area of ​​health,” he said on Tuesday in a telephone switch.

If, for example, a major cyber attack led to widespread, long-lasting power outages, a civilian operational staff would be needed who could immediately coordinate all possible helpers, including the Bundeswehr.

A correct approach is that the federal government wants to expand the Federal Office for Civil Protection and Disaster Relief. This must be put in a position to coordinate large-scale operations.

Schelleis warned that the lessons must be learned now as long as the difficulties in the fight against the corona virus are still present in people’s minds. Any strengthening of civilian crisis management would also benefit the Bundeswehr if there were, for example, major cyber attacks.

Find the best jobs now and
be notified by email.
In the corona pandemic, the Bundeswehr is ready to provide official assistance through successful vaccinations until the end, said the inspector of the armed forces base, who coordinates the corona operations. 15,000 soldiers are currently deployed. With 4,400 soldiers, most of them are still active in tracking contacts in the health authorities. Soldiers are deployed in 348 counties.

Schelleis: “Happy to help until the end of the pandemic”

In the meantime, the application for administrative assistance has also been recorded. “It always works according to the same pattern: The applicants are amazed at how quickly the soldiers arrive, how efficiently and professionally they can be deployed, and always remain friendly,” said Schelleis, who was delighted with the troops’ image gain. “We are happy to help until the end of the pandemic,” he said.

Normally there is a strict separation of internal and external security in Germany: deployments of the Bundeswehr inside are therefore fundamentally prohibited – especially when it comes to the implementation of sovereign tasks.

In the early days of administrative assistance, some municipalities had requested soldiers for sovereign tasks, such as roadblocks, which had to be refused. The Bundeswehr, which has only a few doctors and paramedics, also had to refuse to operate emergency clinics.

Today the soldiers help with rapid tests in retirement homes and hospitals as well as in test and vaccination centers, in addition to the health authorities. Schelleis expects that the number of visits to nursing homes will continue to decrease because most of the people there are vaccinated, and that with the arrival of more vaccine doses there will be more visits to vaccination centers. He assumes that the contingent of 25,000 soldiers will also be sufficient in the third wave.

The initial hesitation in many municipalities to request the Bundeswehr to support the health authorities has subsided. Chancellor Angela Merkel (CDU) and the country leaders appealed to those responsible on site before Christmas to use the administrative assistance of the Bundeswehr.

The background to the increased number of applications since then is likely to be that the federal government has since waived payment for the operations by the municipalities for the pandemic period. The downside: There is now apparently no incentive in many places, as decided by the federal and state governments, for example to recruit staff for the test centers via the Federal Employment Agency, which the municipalities would then have to pay.

The downside of Corona aid missions: The Bundeswehr is lagging behind when it comes to training its own soldiers. The foreign missions and their preparation are not endangered, but after the pandemic it will take time to catch up on the training backlog across the troops. This could possibly lead to delays in the operations in Eastern Europe.

More: Cabinet postpones the modernization of the Bundeswehr

FFP2 obligation: expansion for Anschober a “variant of thought” – Coronavirus...

Intel Ice Lake-SP: The new server CPUs will be presented on...

Augsburg / Gersthofen: How an Ikea picture is misused for fake...