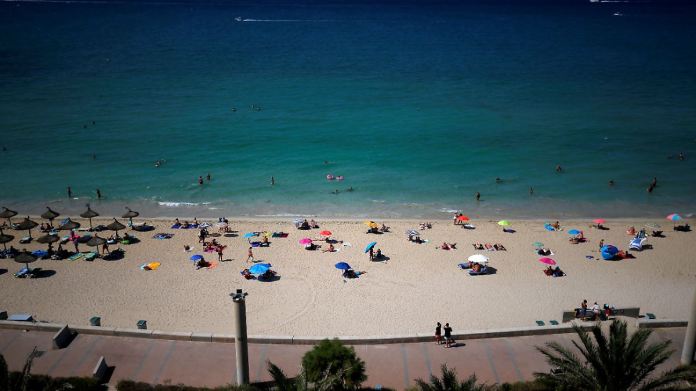 The Easter season is just around the corner. Tens of thousands of Germans have already booked their vacation on Mallorca. But given new test measures and stricter corona rules on the Germans’ favorite island, it should not be left out as hoped.
Carefree Easter vacation under palm trees? For Mallorca fans that sounded like a dream come true almost two weeks ago. When the travel warning and thus the quarantine requirement for Mallorca were lifted on March 14, there was a real booking boom. But the newly decided test obligation for returnees, restaurants and pubs that are closed in the evening plus sealed pools on site are just some of the inconveniences that the around 40,000 German-speaking Mallorca travelers now face. An overview:

For entry to Mallorca, the Spanish authorities continue to require a negative PCR corona test. And it is now clear that Mallorca vacationers from Germany also need a test for their return trip. The Federal Ministry of Health recently announced that a test obligation for all flight returnees will come into force from Monday to Tuesday. According to the relevant ordinance, those affected would have to present proof to the carrier “before leaving abroad.

The holiday island has already made provisions for this case: a test center opened at Mallorca airport on Wednesday. The result of the PCR tests, which cost around 70 euros, should be available 30 minutes to an hour and a half later. According to the new regulation of the federal government, however, a cheaper quick test is sufficient for Mallorca returnees. However, if a test turns out positive, the journey home is not permitted. Tourists then have to isolate themselves on the island at their own expense. Until you can present a negative corona test.

Considerations about a general travel ban

However, the obligation to test flight passengers is not enough for many as a travel brake – including Chancellor Angela Merkel. She is considering temporarily stopping trips to popular holiday regions altogether. Merkel asked the responsible ministries to examine possibilities for this. However, the Chancellor said that she could not anticipate the result. A restriction would be legally difficult. “We cannot act illegally,” said Merkel.

The coalition partner, however, vehemently rejects a real travel ban. “There will be no general ban on trips to popular holiday areas abroad with the SPD parliamentary group,” said parliamentary manager Carsten Schneider. “Generally banning trips abroad goes beyond sensible protective measures, is disproportionate and contributes to further uncertainty among the population.”

But Mallorca vacationers are not only threatened with frustration before they leave. For a few days now, Corona has also been on the rise again on the Mediterranean island. The number of new infections per 100,000 inhabitants within seven days rose from around 20 to 30. The island politicians reacted promptly to the worrying development: They tightened the corona rules until at least April 11th. As of today, the interior areas of pubs, cafés and restaurants have to close again. The outdoor terraces and beer gardens are currently still open, but as before only until 5 p.m.

Stricter rules also apply in hotels. Community facilities in closed rooms such as swimming pools, spas, jacuzzis or fitness rooms have to close completely. Communal outdoor facilities such as pools or the hotel’s own restaurant terraces are only open until 5 p.m.

At the hotel bar, which was previously allowed to drink until 10 p.m., it will also be tattooed at 5 p.m. in the future. Only the hotel restaurants are allowed to serve house guests in their dining rooms until ten o’clock in the evening. Then, by the way, a night curfew also begins. The island authorities also point out that only guests from one household can stay in hotel rooms and private accommodation.

Change of heart in Mallorca

“The infection data get us,” said Francina Armengol, the regional head of government of the Balearic Islands, which includes Mallorca, but also Ibiza, Menorca and Formentera. The Balearic Minister of Economics, Iago Negueruela, said it was not intended that foreign tourists would come at Easter. The regional politician emphasized that it was not Mallorca’s business that tourists were allowed to arrive again anyway, but that it was the responsibility of the governments of Spain and Germany.

It is important to secure the summer season, said Negueruela. “Now that mass vaccination can begin with new vaccines, we cannot afford an increase in the number of cases that could affect the holiday season.” A sudden change of heart. Because just two weeks ago, Prime Minister Armengol had explicitly invited Germans to spend their Easter vacation in Mallorca.

Dangerous virus variants in your luggage?

The number of corona infections in Mallorca is still low compared to Germany. Within one day, 33 people on the island tested positive for the virus. The 7-day incidence is just under 30. Nevertheless, the regional government of Mallorca urges great caution. Because the British variant of the coronavirus has already been diagnosed in 83 percent of all new infections, which is more contagious and leads to more severe disease courses, according to the Ministry of Health.

But not only the B.1.1.7 could be dangerous for vacationers, according to Karl Lauterbach. Mallorca has denied that there is the particularly contagious Corona variant P1 on the island – “I don’t think so, by the way, so I believe that P1 is there,” said the SPD health politician on the ZDF program “Maybrit Illner”. A few days ago, the university clinic Son Espases on the island denied the reports that were also circulating in Germany that P1 had been diagnosed on Mallorca. “We found variant B.1.1.28. The dangerous variant (from Brazil) is B.1.1.28.1, also known as P1,” said the clinic’s spokesman, Juan Carlos González.

“There is still trickery, I don’t believe a word there. I believe that they have long since got P.1”, Lauterbach said now. And he also considers the low number of cases to be embellished. Lauterbach’s attitude towards Mallorca travel is therefore clear: “I cannot explain to anyone that there is a celebration in Mallorca with a possibly incorrect incidence, and the rules do not apply there. And here (in Germany) people cannot leave.”

Lindner calls for regular government consultations with the USA – Germany...

Ironically in the super election year – is the CDU sinking... Risk of death! Samira reports about emergency surgery after the...