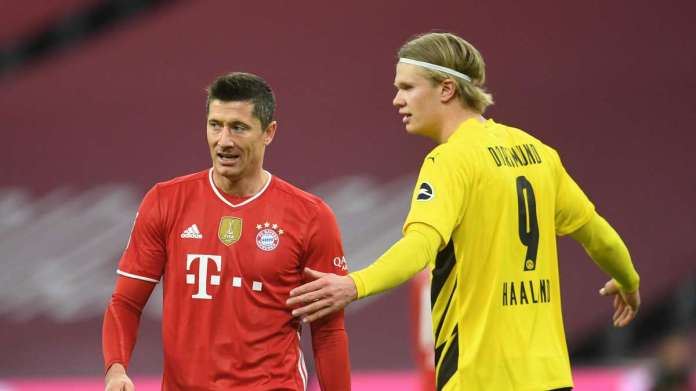 Erling Haaland is already taking off at BVB. Matthias Sammer tells in an interview what he thinks of a possible transfer to FC Bayern.

Dortmund – At the age of only 20, Erling Haaland is already an absolute top performer at Borussia Dortmund. In the current season alone he scored 33 goals in 31 competitive appearances and prepared eight more goals.

It goes without saying that such top performances do not go unnoticed. Although he is still under contract with BVB until 2024, Erling Haaland is repeatedly associated with a transfer to FC Bayern.

Matthias Sammer (53) doesn’t think so of such mind games. “That won’t happen today or tomorrow because FC Bayern has Robert Lewandowski”. What could prevent a transfer: The Pole’s contract does not expire until the summer of 2023, while Erling Haaland may seek a change earlier.

In the summer of 2022, an exit clause of between 75 million and 100 million euros will apply, depending on the media report. Should BVB not qualify for the Champions League, there may even be an exit after the current season.

“I would also advise Erling to see the value of Borussia Dortmund regardless of the contract constellation: The club gave him a lot,” warns Matthias Sammer. In any case, only a handful of clubs would be considered as future employers.

Erling Haaland is “very, very good”, but “not ready” for the move to a top club. In contrast to Robert Lewandowski (32), when he made the transfer to Munich in 2014 after four seasons with BVB (all news about Erling Haaland on RUHR24.de).

“Robert was finished when he went to Bayern, it was clear: He would play in Munich straight away,” said Matthias Sammer. Finally, he cites Ousmane Dembélé (23) as a counterexample. The Frenchman joined FC Barcelona in 2017 after just one year at BVB. Since then, the € 135 million transfer has not met the high expectations for either side.

BVB striker Erling Haaland: Mattias Sammer conjures up the intelligence of a champion

In order for things to work differently at Erling Haaland, Matthias Sammer should take his time with a change. “The character trait of champions is not necessarily patience – but intelligence,” he says. In other words, it would be wise for the young Norwegian to continue to mature despite great ambitions in Dortmund.

“There is a wonderful structure at BVB with experienced leadership players and players capable of development,” enthuses Matthias Sammer. “This is fantastic here, a unique selling point in the world.”

BVB striker Erling Haaland does not want to talk about transfer: “I still have three years of contract”

By the way: Erling Haaland is not yet – at least officially – dealing with a change. “I still have a three-year contract. I’m not angry about that, ”he told the Norwegian daily Dagbladet.

BVB striker Erling Haaland doesn’t want to know anything about a transfer to Real Madrid either: “The media are the ones who write about it, I don’t concentrate on these things. I want to improve every day. “

A curious exchange transfer between Manchester United and BVB, in which Erling Haaland is also supposed to play a role, can therefore be confidently referred to the realm of fables. Matthias Sammer is happy if the goal-hungry striker Borussia Dortmund stays around for a while.

Robert Lewandowski from FC Bayern is already world class, Erling Haaland is on the way there. “He’s got greed. At this age and in terms of statistics and the desire for goals, I’ve never seen anything comparable. “

Matthias Sammer considers Mats Hummels (32) to be even more important than Erling Haaland at BVB. “His departure would hurt the club even more.”

Evidence in Lower Saxony: mutation in the state since November

Israel and the UAE want to bypass the Suez Canal

Brussels is calling for the strict travel bans for the British...

Corona: Kretschmann agrees citizens with a hard shutdown from next week