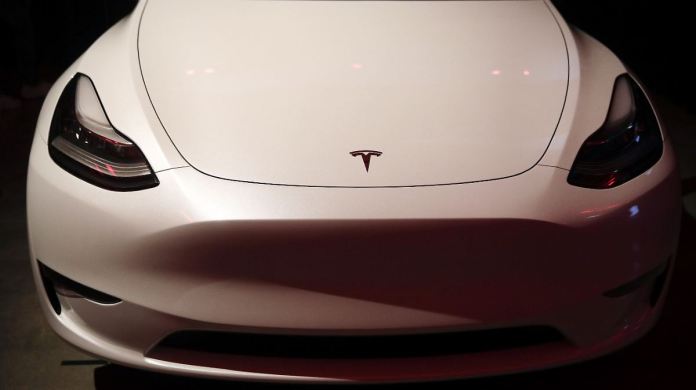 Tesla is considered an electric car pioneer. The group is worth around 520 billion euros on the stock exchange. But the exceptional position wobbles, the shine missed. The reason: The German automotive industry is finally taking the topic of electromobility seriously. Halali!
According to Hermann Hesse, there is a magic in every beginning. Indeed: Elon Musk and Tesla have sparked plenty of imagination and magic in the souls of shareholders. But the magic is increasingly losing its shine. The model and innovation fireworks of the German car manufacturers started late when it comes to electromobility, but it’s here now. And it is having an effect: Tesla’s market share is shrinking. The chances of finally making profits through growth in the future are almost zero. And above everything, the sword of Damocles hovers from an investment ruin on the green meadow in Brandenburg. Shareholders – spoiled by price increases for over two decades – are still loyal to Tesla, but how much longer?

The author’s many years of professional experience with economic developments, automobile markets and companies as well as their comings and goings allow a reliable prediction at least that there is no eternal bond to be made with the magic. And that the magic of the rise of Tesla will be followed by the painful decline as the next stage. Because the fact is: the decline has already begun. There are three reasons for this: one-sided focus on Musk as a master father and marketing guru, an extremely narrow model range without combustion technology and the combustion engine competitor’s successful catch-up. In short: The pack is not only catching up, it is there now!

All corporate and business processes at Tesla have so far been completely tailored to the person Musk. He is the sole responsible person. In fact, there are no substitutes, nor are there direct successors or named. Musk decides quickly, but lonely and unpredictable. Legal disputes are therefore en masse on the agenda. Most recently, Musk has been offered the title “Technoking” by Tesla. The CFO will be allowed to call himself “Master of Coin” in the future, probably referring to Bitcoin, in which Musk recently invested 1.5 billion dollars.

Tesla’s personnel and financial structure problems may only be virtual so far, but the market problems are already very real. The company’s market share – even for purely electrically powered electric cars – has been on a downward trend in Germany for two years, for example. While it was around 30 percent at the beginning of 2019, it fell to around 9 percent in 2020. A further decrease in 2021 is programmed, VW, BMW and Daimler are already making sure of that.

This development depends primarily on Tesla’s one-sided and total focus on battery electromobility and connectivity. The German manufacturers can now do that too, but are following customer requests and relying more and more on innovative plug-in hybrid technology, which offers an environmentally friendly combination of combustion range safety and comfort with no local electrical emissions. The legislator has recognized and accepted this technology as reducing CO2.

The market proves that the German manufacturers are right, as the current new e-car registrations from the Federal Motor Transport Authority (KBA) show: New electric registrations increased by 143 percent in February 2021 to 40,160 cars compared to the same period of the previous year. The share of e-cars in the overall market reached 20.7 percent – every fifth new car in Germany is already electrified.

So-called battery electric cars, such as Tesla builds, achieved a market share of 9.4 percent with 18,278 cars, while 21,879 electric vehicles used plug-in technology. Tesla recorded an increase of 180 percent with e-cars in February 1918, but the market share was only 1 percent. The feared displacement of domestic manufacturers from the market is therefore unlikely to take place in 2021.

In addition, Tesla does not have a pole position anywhere after the e-car market segments: In the series of models with the most registrations, the VW Up comes first with the BEV with 2215 units, followed by the plug-in hybrids VW Golf with 1667 units.

The competition is catching up

The auto industry has woken up and has launched an unparalleled electric offensive. All major global automakers are rapidly expanding their Stromer fleets. The German manufacturers, whose electrical expansion plans are so extensive in both the premium and volume segments, that Tesla is there with its narrow car and truck model range (Model 3, Model S, Model Y, Model X, Cybertruck) are top of the list , Roadster and truck semi) can no longer keep up with the exception of the Model 3.

The range of electrified automobiles competing with Tesla (BEV + PHEV) is growing every day; in Germany alone, 30 new electric models will be added to the 120 models already in existence in 2021, covering the entire breadth of the market from the lower to the upper segments cover; The electric drive with the Daimler EQS is even finding its way into the luxury sedan class. Especially with the PHEV models, where the German manufacturers are extremely strong, the electric car pioneer cannot keep up. Because Tesla can’t do burners.

Tesla has nothing to counter this model offensive. Even in the market for all-electric cars (BEV), Tesla is no longer in the group of the top five. The company’s very existence is at stake. As in the German market, Tesla’s market share is declining everywhere, while the German auto industry is also gaining in importance again. In Europe, the German manufacturers are already “European champions”. And even in the USA, Tesla’s homeland, there are now fewer electric cars than in Germany.

Musk himself does not seem to be entirely convinced of the profitability of such future projects. There is no other way to understand his public announcement that he had invested 1.5 billion US dollars in bitcoins. Money that is thus withdrawn from investments as well as from the tax authorities, shareholders and other creditors. And that hopefully does not come from Brandenburg funding.

Many dogs are dead to the hare

The development around Tesla confirm the old folk wisdom “Many dogs are dead to the hare “. Such processes are not new in the economy: the pioneer enters the stage, establishes a completely new market with an innovative product and is initially very successful as a monopoly. Until the competition wakes up, starts to catch up and urges the pioneer to give up or hand over.

This catching-up and displacement process is currently taking place worldwide in all electric car markets under the leadership of the German automotive industry, especially Volkswagen.

Even in monopoly times, Tesla was unable to grow profitably. With the increasing oligopolization of the market this has now become completely impossible. Tesla is taking a difficult path. In the end, it cannot be ruled out that a German car manufacturer will be able to acquire cheaply a gigafactory in Grünheide near Berlin, which is highly subsidized by German taxpayers. Golden Globes: The favorites and the many question marks