1/7
Eric Maxim Choupo-Moting is not allowed to join the national team.

Because the Cameroonian Football Association sent the national team invitation for Bayern star Eric Maxim Choupo-Moting to the wrong e-mail address, the indomitable lions in the World Cup have to do without their attacker.

Camille Just Choupo-Moting, the father and manager of the Bayern star, criticized the association sharply in relation to the African portal Naja TV: “That is a lack of professionalism.”

Many a Bundesliga fan may have a déjà vu. There was something with a technical breakdown and Choupo-Moting: On January 31, 2012, the now 32-year-old was supposed to move from HSV to Cologne, because of a technical breakdown on the fax machine, the signed contract arrived at the DFL a few minutes after the deadline .

In the meantime, fax machines have almost completely disappeared, if only it weren’t for the problem with the email address … (skr)

Scholz: Up to ten million corona vaccinations per week | ...

“We children from Bahnhof Zoo”: cruel and fascinating

GNTM (Pro7): Candidate Lijana Kaggwa from Kassel – restart as an...

Long COVID: This is how those affected deal with long-term corona...

Free Covid tests at around 100 pharmacies in Upper Austria 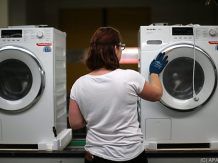