After 10 days, only 26 bodies have been recovered from Camogli (I). The number of missing deaths even had to be revised up from 200 to 320. Now there is also a threat of a change in the weather.

Since parts of the cemetery of Camogli (I) fell into the sea in a landslide on February 22nd, only 26 corpses have been recovered during diving operations, as reported by «Genova24». If 200 corpses were assumed at the beginning, the authorities corrected the estimate to 320. This is because there are sometimes several dead people in one coffin.

Because the recovery work is progressing so slowly, a struggle against time has developed. Because bad weather is forecast for the coming week – that could make the work of the divers impossible, who are supposed to work with a ship platform and an excavator arm in the next phase. According to the weather forecast, the first rainfalls are already possible from Friday. From next week storms are even possible, which could make the coastal area look completely different.

200 coffins fell into the sea

In the Italian coastal town of Camogli, 200 coffins fell into the sea 10 days ago after a landslide. Part of the coastal embankment had completely broken away. The fire brigade of the neighboring town of Rapallo and divers have since been on duty to recover the coffins floating in the water and to dive for the corpses that were thrown out of the coffins by the force of the landslide.

“Some of the fallen remains are probably also on the slope under the rubble,” said Francesco Olivari, President of the Camogli community after the accident. Specialists from the Italian authority NBCR, who are responsible for nuclear, chemical and biological disasters, are also on duty.

Concern spread among the population living on the cliff above the sea. “I’m not a geologist, an expert has to come soon to carry out an inspection,” said a resident of the newspaper “Il Secolo XIX”. From the point of view of the authorities, there does not seem to be any immediate danger because, unlike a similar landslide in Genoa in 2014, no evacuation order was issued.

Do you have or hat someone you know Trauma?

Alexej Navalny probably has to go to the “most brutal colony...

Michael Schiele is the new head coach at SV Sandhausen

Corona crisis: curfew in the Netherlands remains in force for the... 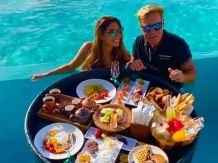 Vacation in the Maldives: Dieter Bohlen is sharply criticized by fans...