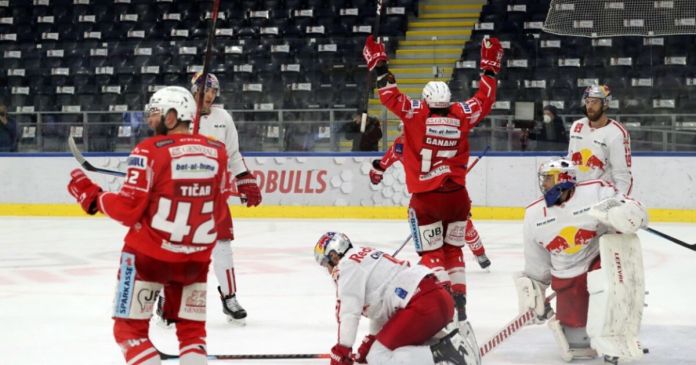 The Vienna Capitals and the KAC were the winners of the second games in the semifinals of the ICE Hockey League. Thanks to a 2-1 win against HCB Südtirol in the “best of seven” series, the Viennese equalized 1: 1, while the Klagenfurt team also won their second duel 3: 2 after extra time against Red Bull Salzburg. The third matches will follow on Thursday.

With the double pack, Ticar played a major role in the KAC victory in Salzburg

The Vienna Capitals turned the match against Bolzano, who had recently won twice in Vienna. Daniel Frank put the guests in the lead 69 seconds before the end of the first period, but Jerome Leduc equalized shortly before the end of the middle section (40th). The defender surprised HCB goalie Leland Irving. Benjamin Nissner (50th) scored the winning goal for the debut in the series, who – alone in front of Irving – carried the puck over the line in the second attempt. In the eighth duel of the season, only one goal made the difference between the two teams for the sixth time.

In Salzburg, the best away team in the league also needed a good deal of luck. The KAC got off to a better start and took the lead through Rok Ticar (14th). But Salzburg countered. After the “cops” had received two power play hits in the first game, this time they managed a double in the majority. Alexander Rauchwald (28th) and Dominique Heinrich (57th) turned the match into an alleged home win. But Ticar saved the Klagenfurters in overtime just 26 seconds before the end. There the record champions had the better end for themselves despite being outnumbered: Clemens Unterweger fixed the hard-fought 3-2 victory after 4:22 minutes of extra time.

Donald Trump: his son-in-law’s lawyer is said to have offered pardons...

Off to the west! The tram will go to Moabit...

Who can celebrate with whom? Grosjean on thoughts in the burning wreck: “I will die”

Antigen testing: why the sample in the mouth is so error-prone