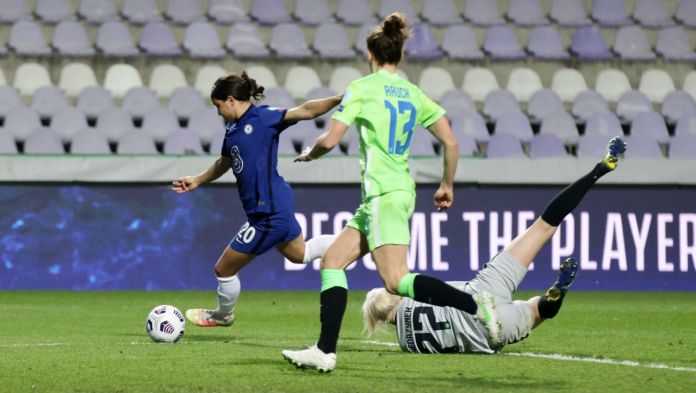 The footballers of VfL Wolfsburg are facing the end of the Champions League. In the quarter-final first leg against Chelsea, the team of coach Stephan Lerch lost 1: 2 (0: 0). Samantha Kerr (55th minute) and Pernille Harder (66th) scored for the Londoners, Dominique Janssen (70th / penalty) scored the next goal.
The game, which was played in Budapest, Hungary due to the corona quarantine regulations, started with a moment of shock for the Wolfsburg women: Defender Sara Doorsoun played a back pass that was too short, only a straddle from goalkeeper Katarzyna Kiedrzynek prevented a great chance for the lead for Chelsea’s Harder (12. Minute). It was a reunion for Europe’s two-time football player of the year: In the summer, Harder left VfL after three and a half years for London.
Wolfsburg then took control of the game and had a number of good opportunities. Alexandra Popp first hit the post (14th), then with her hand into the goal (16th). Referee Jana Adámková rightly refused to give the goal and showed Popp the yellow card. Before the break, Fridolina Rolfö (21st, 32nd, 39th) and Ewa Pajor missed further opportunities to bring the women into the lead with an overhead kick (21st).

In the second half, Chelsea started more aggressively, the Londoners put VfL under pressure earlier. The Wolfsburg women had the first big chance: Rolfö headed to the post after Svenja Huth’s cross (49th). Chelsea showed themselves to be much more efficient: Kerr took the first chance to lead (55th). Rolfö failed after Popp gave Chelsea goalkeeper Ann-Katrin Berger (63.). On the other side, Kiedrzynek initiated the next goal with a playback error, after cross passes from Kerr and Kirby Harder completed the 2-0 (66th).

After a foul on Svenja Huth, Janssen shortened with a penalty (70th) and gave the Bundesliga runner-up at least one away goal. In the second leg, which will take place next Wednesday (2 p.m., TV: Sport 1), the Wolfsburg women have home rights. However, the game will again be played in Budapest.

Bayern: line-up against Lazio? Star struck – Flick has to...

Vaccination debacle in Germany: failure of the countries to meet

China’s largest fintech is being dismantled by the regime