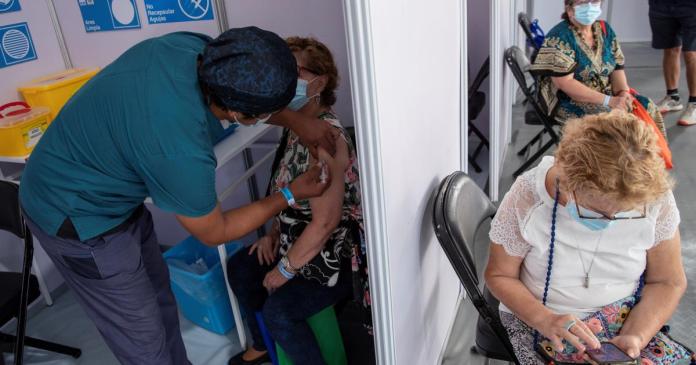 Chile is the country with the highest number of people vaccinated against the coronavirus per 100 inhabitants in the world in the last seven days, overtaking Israel. “Today we have a new reason to be proud: Chile took first place in the global ranking of doses administered (within the last seven days) per 100 inhabitants,” wrote the government of the South American country on Twitter on Tuesday.

In total, the South American country of 18 million people has administered at least one vaccine dose to 4,176,094 million people since the start of its vaccination campaign in December. That corresponds to more than 21 percent of the population. On Monday, Chile registered a daily record with 319,014 people vaccinated, as the newspaper “La Tercera” reported. Chile, along with Mexico and Costa Rica, was one of the first countries in Latin America to start vaccinating the population and had negotiated early to acquire vaccines. It was thus possible to guarantee 35 million cans, 10 million of which have already arrived. Most of them come from the Chinese company Sinovac.

Despite the comparatively successful vaccination campaign, the country has high numbers of infections – most recently more than 5,000 new people infected every day – and that for several days in a row. According to the latest data from the Ministry of Health, a total of 864,064 people in Chile have been proven to be infected with the coronavirus, 21,182 people have died in connection with Covid-19.

Police did an excellent job

Mutated virus from Wengen: 120 students and families have to be...

Insane! KFC brings a console with a chicken warming box