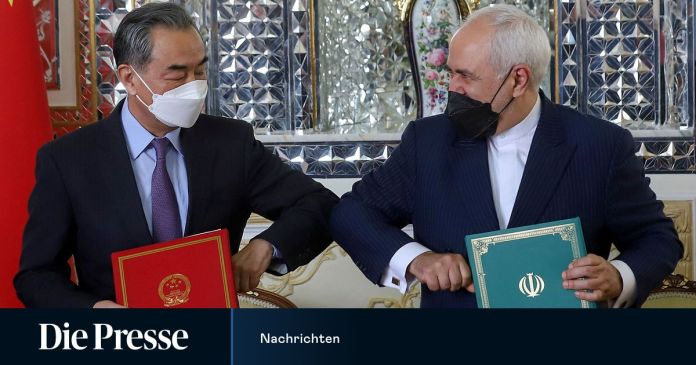 Now the way is clear for China’s investments, it said. In return, Iran wants to deliver cheap oil. Military cooperation is also planned. This is not well received by the population.

Iran and China signed a 25-year cooperation agreement in Tehran. This clears the way for China to invest billions, it said on Saturday on state television. In return, Iran wants to deliver oil at low prices. Cooperation in the military field is also planned. Iran’s President Hassan Rouhani described cooperation with China as strategic.

“We want China to be Iran’s major trading partner,” said Rouhani, according to the Presidential Office’s web portal, in his meeting with Chinese Foreign Minister Wang Yi. He had previously classified the agreement as a strategically important project for economic growth in Iran as well as stability and peace in the region. The Iranian Foreign Ministry called the document a plan for trade, economy and transportation cooperation “with a special focus on the private sector of both sides”.

For China, the agreement with Tehran is part of its ambitious One Belt, One Road initiative, which ties in with the historic trade routes of the Silk Road. China is already Iran’s most important trading partner.

Before the US unilaterally withdrew from the international nuclear agreement with Iran under then-President Donald Trump in 2018 and imposed new sanctions on the country, China was the world’s largest buyer of Iranian oil. In 2016, the government in Beijing promised to increase bilateral trade more than tenfold to $ 600 billion over ten years.

Due to the sanctions imposed by the USA, among other things, Iran is in an acute economic crisis that has been exacerbated by the corona pandemic. Since the new US President Joe Biden does not want to lift the sanctions in the short term, the government is orienting itself more towards China and Russia.

Snow chaos in Athens: Acropolis disappears in the snow

Coronavirus: “No Covid” initiative warns of openings without a test strategy

Vaccine against Corona: This is how the vaccination started in Hamburg

Calls for the end of lockdown become louder

The EVZ captain moves on – Diaz leaves his heart club...