Because the USA and Canada condemned the Chinese Uyghur policy and imposed punitive measures against the country, China in turn responded with sanctions. Beijing has already acted similarly against the EU and Great Britain.

In response to sanctions for suppressing the Uyghur minority, China has in turn imposed punitive measures against politicians from the US and Canada. Among other things, two members of the US Commission for International Religious Freedom, Gayle Manchin and Tony Perkins, as well as the Canadian MP Michael Chong and the Canadian Parliamentary Committee on Human Rights are affected by an entry ban, the Chinese Foreign Ministry said.

The UK, the EU, Canada and the US imposed sanctions on China earlier this week for cracking down on the Uyghur Muslim minority in the northwestern province of Xinjiang. Beijing reacted angrily to the measures and imposed sanctions on ten politicians and scientists as well as four organizations from the EU, including the German EU parliamentarian Reinhard Bütikofer from the Greens.

China has now accused the US and Canada of imposing sanctions “based on rumors and disinformation”. The sanctioned “must stop political manipulation on Xinjiang-related issues and stop interfering in any way in China’s internal affairs,” the ministry said. Those affected are no longer allowed to enter mainland China or the Hong Kong and Macau special administrative areas, their assets there will be frozen. Chinese citizens and institutions are prohibited from cooperating with them.

British politicians and scientists are also affected by Chinese punitive measures. Great Britain’s Prime Minister Boris Johnson recently protested against those affected and received five MPs. “I stand by their side and that of other British citizens who have been sanctioned by China,” Johnson tweeted afterwards. As reported by the British media, the Prime Minister described the MPs as “warriors in the fight for freedom of expression”.

Oppression of the Muslim minority

According to human rights organizations, at least one million Uyghurs and other Muslims are imprisoned in hundreds of detention camps in Xinjiang. There they are reportedly being forced to give up their religion, culture and language, and in some cases also mistreated. Beijing rejects the allegations and speaks of training and work programs aimed at combating extremism in the regions.

Meghan and Harry: did they steal the show from Princess Eugenie? 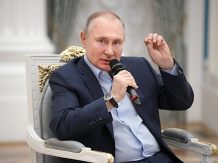 Russia wants to review relations with the USA – Putin calmly...

Traveling in Corona times? How safe is the Mallorca vacation...

Does Fiona Erdmann want to get rid of pregnancy kilos again?