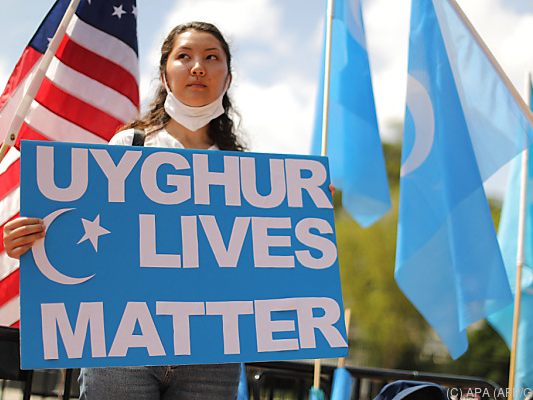 Tensions between China and the West in the dispute over the suppression of the Uyghurs are growing. After sanctions against several European politicians and organizations, Beijing also imposed punitive measures against representatives of the USA and Canada on Saturday, as the Chinese Foreign Ministry announced. China responded to sanctions from the West. The US government rejected the move as “unfounded”.

The UK, the EU, Canada and the US imposed sanctions on China earlier this week because of the repression of the Uyghur Muslim minority in northwestern Xinjiang Province. Beijing rejected the allegations and in turn imposed sanctions on politicians and scientists as well as organizations from the EU and Great Britain.

China accused the US and Canada of imposing sanctions “based on rumor and disinformation” and in turn ordered punitive measures against two members of the US Commission on International Religious Freedom, Gayle Manchin and Tony Perkins, as well as Canadian MPs Michael Chong and the Canadian MPs Parliamentary Committee on Human Rights.

The sanctioned “must stop political manipulation on Xinjiang-related issues and stop interfering in any way in China’s internal affairs,” the ministry said. “Otherwise you will burn your fingers.”

The US and Canada condemned the Chinese government’s actions. “Beijing’s attempts to intimidate and silence those who stand up for human rights and fundamental freedoms only add to the growing international investigation into the continuing genocide and crimes against humanity in Xinjiang,” said US Secretary of State Antony Blinken am Saturday.

Canadian Prime Minister Justin Trudeau described the measures as “an attack on transparency and freedom of expression”. The Canadian MP Chong saw the sanctions against him as a “badge of honor”. “We have a duty to denounce China for its crackdown on Hong Kong and its genocide against the Uyghurs,” he wrote on Twitter.

According to human rights organizations, at least one million Uyghurs and other Muslims are imprisoned in hundreds of detention camps in Xinjiang. There they are reportedly being forced to give up their religion, culture and language, and in some cases also mistreated. Beijing rejects the allegations and speaks of training and work programs aimed at combating extremism in the region.

On Saturday, Biden also spoke out in favor of a competing project for the trillion-dollar “New Silk Road” in China. “I have suggested that we should essentially have a similar initiative coming from democratic states to help those around the world who do indeed need help,” Biden said.

Beijing’s influence has grown in some countries in recent years through loans and projects under the “New Silk Road” initiative. The project sparked concern among regional powers and especially among Western nations. As part of the initiative, China helped a number of countries build or develop roads, railways, dams and ports.

Merkel comments on the Corona budget in the general debate

Fischnaller to kick off the podium – tobogganing on the artificial...

Confusion about mask requirements for joggers and cyclists

All episodes at once on Amazon Prime

Corona vaccine in Germany: Biontech package insert – What does it...