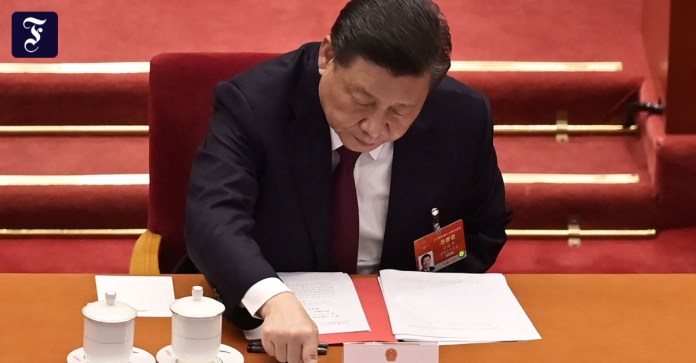 NJust before the European Union imposed sanctions on China this week, there were voices in Brussels that Beijing would certainly moderate its retaliation. After all, it wants to prevent the Europeans from taking the side of the Americans in the great power conflict between China and the United States. That was a misjudgment. China has not just paid double the punitive measures. With its sanctions against EU parliamentarians, it also accepted that the investment agreement concluded in December is now in question.

Instead of settling for that, Beijing subsequently incited an Internet mob against European clothing companies such as Adidas and H&M, which had declared that they would not use cotton from Xinjiang in their products. Beijing could hardly have given American President Joe Biden better arguments for close coordination of China policy before his virtual meeting with the European Council. At first glance, Beijing has scored an own goal with it.

Xi does not avoid confrontation

But the Chinese leadership decides according to different standards. Xi Jinping’s idea of ​​the reborn world power China stipulates that critics must be punished. In his view, the conflict is a welcome lever to further fuel nationalism in one’s own country and to portray oneself as a statesman who has given the nation back its dignity. In the centenary of the founding of the Communist Party, this is at the top of his list.

The State Department compares in all seriousness the human rights sanctions imposed by the EU, the United States, Canada and Great Britain with the violent repression of the colonial powers against China in the 19th century. Every elementary school child in China has internalized the shame of that time.

The foreign policy apparatus is more concerned with demonstrating its loyalty to the head of state than reporting back to Beijing that it might be harmful to drive the EU into Washington’s arms. Europe will have to get used to the fact that under Xi Jinping, China no longer avoids confrontations and believes that it has to gain respect through intimidation.

This week marked a turning point in two respects: The reaction from Beijing has made it clear how easily an escalation spiral can also set in motion in the relationship between China and Europe. It has also been shown that it will become increasingly difficult to watch the great power conflict between America and China from a safe distance.

The commitment of the new American administration to its allies strengthens the EU in dealing with China, but it also demands more responsibility from it. It is no longer enough to focus primarily on giving European companies access to the Chinese market. Beijing has long since started using economic dependencies as a strategic weapon. China can do that as long as it can pick individual countries, like Australia recently.

In the future, there must be a coordinated response, like the coordinated sanctions of the EU, Great Britain, the United States and Canada this week. Instead of fixating on China, it is important to expand connections with other partners in Asia. In order to arm itself for the new reality, Europe must finally break free from the self-employment in which it has remained since the beginning of the Corona crisis.

The way to the vaccination center should be easy

Coronavirus in the capital: The first cans have been destroyed in...

MacBook Air: Apple is said to be planning a high-end version

Salzburg fears about remaining in the European Cup: “It will be...

WoW: An item level dream for the rich