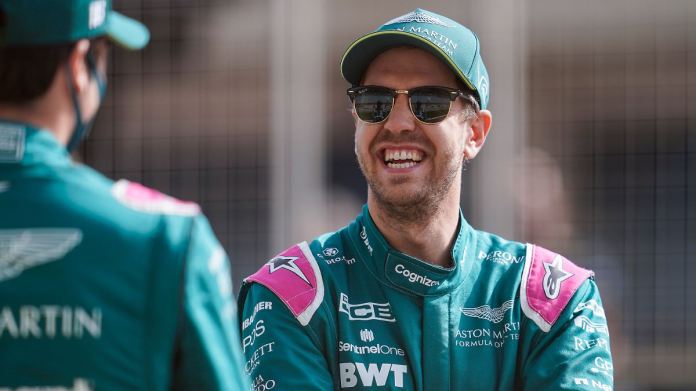 Claims at Aston Martin
The new mission of Sebastian Vettel

Only Lewis Hamilton and Michael Schumacher have won more Formula 1 races than Sebastian Vettel. With the move to Aston Martin, the road to 54th success no longer seems quite as far as in Ferrari. But first, other goals are in the foreground anyway.
Sebastian Vettel will also need patience as a construction helper and a highly decorated success accelerator. “You have to give the whole thing a little time,” emphasized the four-time Formula 1 world champion. This Sunday he starts a new mission: The new Aston Martin is green like hope and no longer red like alarm during his six years of frustration at Ferrari.

“The main thing now is to get on the podium regularly,” said Gerhard Berger. The 61-year-old Austrian knows Vettel very well. He should set himself the podium finish as a goal in the first two years, said Berger. Berger does not see the now 33-year-old Heppenheimer on the World Cup course with Aston Martin. That would be unfair, said Berger, but also emphasized: “Sebastian still has three or four good years ahead of him, if he wants to.”

“He has already proven that he is one of the best racing drivers in the scene that has ever existed,” said Berger with a view to Vettel, who in recent years had to accept more setbacks than he was able to celebrate successes. “His compensation is that he is a four-time world champion. Nobody can take that away from him,” emphasized Berger.

The name is still open

But Vettel wants to go forward, to the very front. Just like racing team owner and billionaire Lawrence Stroll wants to turn Racing Point’s successor team into a world championship team. The noticeable euphoria at the presentation of the AMR21, which also included a greeting from James Bond actor Daniel Craig, was followed by a first small disillusionment during the test drives two weeks before the season opener this Sunday (5 p.m. / Sky and in Live ticker at ntv.de) on the Bahrain International Circuit.

Defective, few laps, hardly any time to get used to the new car, which should also get a nickname in the best Vettel tradition. Sitting together with a few beers is rather difficult in Corona times, explained Vettel in terms of naming.

What the father of three from Hessen also needs in order to be able to call up his best performance is a team in which he feels comfortable and valued. Despite its own declarations of love and enthusiasm at the beginning, Ferrari did not develop into a great emotional wellness oasis for Vettel. It culminated in the manner of separation that Ferrari had announced even before last season’s late first race. For his part, Vettel announced his new commitment to Aston Martin before the 1000th Scuderia race in Formula 1. Whether by chance or revenge, the timing struck Ferrari.

Vettel is not concerned about satisfaction with the troubled ex-team from Italy this year and beyond. “The best thing he can do and what anyone can do is forget the years at Ferrari,” advised former Formula 1 boss Bernie Ecclestone recently. “I am sure that he is now in the right team where he will be taken care of. There he has the prerequisite to show the old Vettel again.”

Bundesliga: Clear statement from Salzburg in the title fight

Politics is preparing for the super election year 2021

GameStop: “Roaring Kitty” and manager have to testify

Corona regulation in Stuttgart: Collection service from libraries must be allowed...