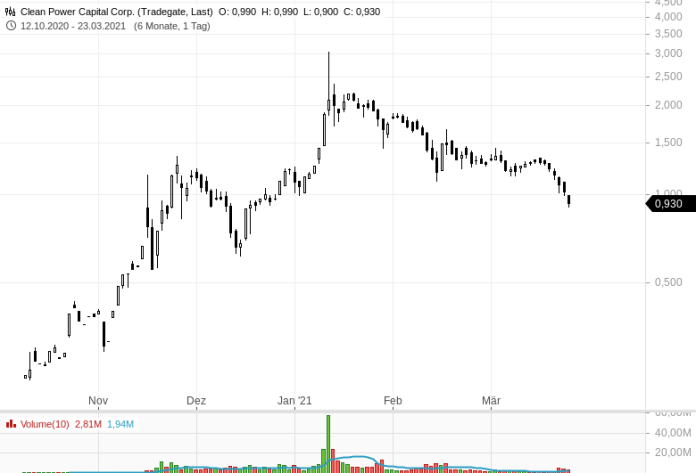 Clean Power Capital Corp. – WKN: A2QG78 – ISIN: CA18452D1069 – Kurs: 0,928 € (L&S)Not seen for a long time and yet recognized. In the list of the most actively traded shares on Tradegate today, the Clean Power Capital share appears again after a long period of abstinence. According to its own statements, the company is active in two major trend markets. As an investment company, it focuses on the areas of health and renewable energies and that caused an extreme price jump at the end of last year. We reported:

A share in hype mode, thanks & goodbye, between euphoria and drama!As feared in the old analyzes, such stocks harbor opportunities, but also enormous risks. It seems that at absolutely the right time I said goodbye to the stock, because according to the last analysis on January 13th, the price only knew one direction, which was down. At its high, Clean Power Capital was traded on Tradegate at EUR 3.05. At the moment you pay less than one euro, although the rate is already falling again in the double-digit percentage range. This means that the losses of the last few weeks now add up to more than 70%.

For this reason I repeat my conclusion / my personal opinion, because nothing has changed about this:

“Getting involved in such a segment is lucrative. With such fluctuations you don’t need a lever! However, I personally think very little of such stocks, at least the way many private traders operate in such markets. Most of them only try to be a “soldier of fortune” because they just blindly jump on hype again. Unfortunately, my experience shows that there is a lot of “lying and cheating” in such markets. Due to the lack of fundamental analysis, I cannot make a statement about Clean Power Capital, but this does not change anything in my basic experience! This is also a share that can only be traded OTC overseas. So the risk is enormous. You have to be aware of that. In my opinion, a successful business basis can only be built around such values ​​if you rely on many horses, each with a manageable individual risk. Then in 10 years you will definitely have the next Apple or Amazon in your depot, but also a lot of “big guns”! “

The stock is currently being sold and there is still no indication that the sell-off has ended. We are in a support range up to around EUR 0.60, but the bulls are not yet able to convince. In addition, the volatility is still very high and if you fully exhaust the support area, we currently still have downside risks of over 30%. Of course, it is not even a sure thing that you turn upwards by EUR 0.60 in the support area.

For me, the share remains a pure gamer share and therefore uninteresting. Not least because of its trading background as an OTC share. Personally, I hope that the stock shows up on Tradegate today because the last private trader is saying goodbye and preferring to turn to more solid stocks, albeit probably with great pain, given the losses in recent weeks. The share is and will remain a hot topic in all areas!

The federal and state governments want to discuss on Sunday at...