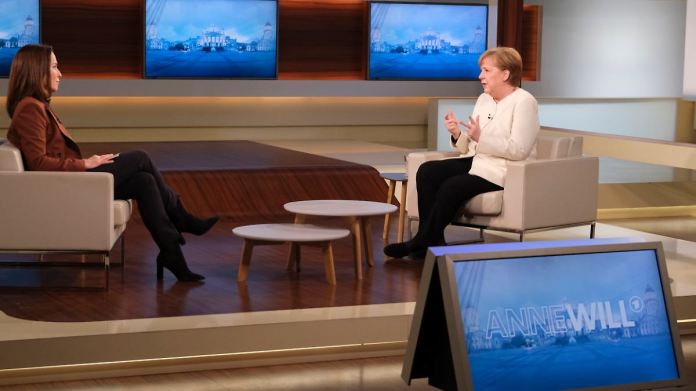 Chancellor Merkel does not believe that so-called model experiments to open up areas of social life are a way of breaking the third wave. In the ARD program “Anne Will” she described the latest federal-state summit as a “caesura”. It couldn’t go on like this.
Chancellor Angela Merkel is exerting massive pressure on the federal states to persuade them to implement the emergency brake and even stricter measures in view of the third wave of corona. In the evening on the ARD program “Anne Will”, she also explicitly mentioned exit restrictions in regions with particularly high numbers of infections: Especially in the evening hours, the restriction of freedom of movement could be “a very important means,” said Merkel. It also brought new contact restrictions into play “to stop the exponential growth”.

Merkel spoke out against an early new Prime Minister’s conference, but stressed that she would not watch until there were 100,000 new infections a day. “We don’t need a prime ministerial conference, we need action in the federal states.” It is “not all so illusion-free that this virus cannot be negotiated with”. There is still too much hope in the game. The existing resolutions can be used as a basis.

All of the easing plans planned by the federal states, including so-called model projects, were clearly rejected. Merkel also indicated that the federal government could act if the states should not take the necessary measures. “We now have to take the appropriate measures with great seriousness. And some federal states are doing this, others are not yet.” If that does not happen “in the very foreseeable future”, she would have to think about how this could be regulated nationwide. “This is my oath of office, this is my obligation.” One possibility is “to tackle the Infection Protection Act again and say very specifically what must happen in which case”.

Merkel emphasized that she was still thinking about it and had not yet made a final decision. In addition, majorities in the Bundestag and Bundesrat are required for all decisions. The federal and state governments must act together. “We cannot decide anything without each other”. But: “We are obliged by law to contain the infection process. And at the moment the containment is not there.”

Opening steps were a compromise

Merkel called the nightly Prime Minister’s conference from Monday to Tuesday, with the resolution of Easter rest, which was then quickly withdrawn, a “turning point” and emphasized: “It can’t just go on like this now, we meet every four weeks and continue doing the same thing.” Many prime ministers would also see it that way. But she’s not finished thinking here.

Merkel said the gradual opening steps agreed at the beginning of March were a compromise. “A compromise with good faith that the emergency brake will actually be implemented. If it does not work now, it is, so to speak, a violation of the decisions we have made.” The previous resolutions with the prime minister provided all the necessary instruments, said Merkel.

She referred to further contact restrictions, exit restrictions and the obligation of employers to offer home office wherever possible. With a view to the Saarland, where the entire country is to be opened after Easter, Merkel pointed out that the number of infections there was not stable. “So this is not the time to consider something like this now.”

Corona summit: Lockdown is to be extended until February 15

“Your Honor”: Escape into police violence and racism

Installation of Big Sur on M1 fails: this must be done

Explosion shakes Nashville: “Clear it now. There’s a bomb, ”it...