The hype surrounding the audio-based chat app Clubhouse, which is only available for iPhones and iPads, is immense. Criminals are currently trying to lure users into the malicious code trap with a supposed application for Android.

The “BlackRock” Trojan is hidden behind the counterfeit. If the malware gets onto the device, it looks for 458 online services and then tries to steal the login data.

These include well-known names such as Twitter, WhatsApp, Facebook, Amazon, Netflix, Outlook, eBay, Coinbase, Plus500, Cash App and BBVA. In the current case, SMS-based two-factor authentication (2FA) does not help either, as the malware can intercept text messages. ESET Mobile Security already protects its users from BlackRock.

“The website that advertises the supposed Clubhouse App for Android looks deceptively real. As soon as the user clicks on the button that is supposed to take him to the Google Play Store, the app is automatically downloaded and installed.

Legitimate apps would always forward the user to Google Play first, ”explains Lukas Stefanko, malware researcher at ESET. “Even during installation, the alarm bells should ring with users. The app is not called ‘Clubhouse’, but ‘Install’.

The malware creator was apparently too lazy to properly camouflage the application. But it could also mean that we will see even more sophisticated copies in the future. “(AFP)

Riots in Washington: Trump fan with horns is a well-known conspiracy...

Corona: So far no references to “P.1” variant in Austria 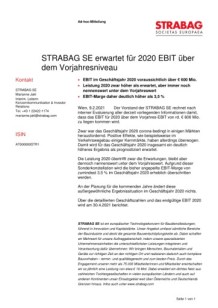 EANS-Adhoc: STRABAG SE expects EBIT for 2020 above the previous year’s...

“Measures must not be relaxed”