The ski flying world champion from Oberstdorf prevailed on Friday (March 26th, 2021) after a scored round with a width of 232.0 m in front of the Japanese Ryoyu Kobayashi (231.0) and local hero Bor Pavlovcic (227.5). “The jump was really good,” said Geiger happily.

Due to strong winds the competition had to be interrupted again and again and ended after only one round. As the second best German, Markus Eisenbichler took eighth place.

Eisenbichler, Geiger and Kobayashi with a shortened start-up

Coach Stefan Horngacher gambled with his two top jumpers, who went from the bar as third from last and penultimate. Both Geiger and Eisenbichler jumped out of hatch eleven with a short run.

While the ski flying world champion was able to take advantage of his chance in a good wind and, thanks to the required distance with a shortened approach, took bonus points with him, Eisenbichler had to struggle with a tailwind. The 29-year-old did not gain enough height after jumping and landed after 223.0 m, which in the end meant only eighth place.

The two Germans were only followed by the previous day’s winner, Kobayashi. Even the Japanese did not catch his best flight and did not come close to the required distance to oust Geiger with a short run-up.

Martin Hamann (202.5 m) as 39th and Constantin Schmid (206.5 m) as 42nd landed in the field that was tied off. The youngsters were therefore not recommended for the team competition on Saturday (10 a.m. in the Sportschau live ticker).

At noon the qualification was canceled and the start of the competition was postponed twice. The day before, a bad fall by the Norwegian Daniel Andre Tande had overshadowed the start of the season finale. The 27-year-old was hit hard on the slope in the trial run and then intubated and mechanically ventilated. Tande is in the hospital in Ljubljana.

Department store Austria: belly spot instead of a tray

Finally: Melody Haase ends up in bed with Siria and Davide! 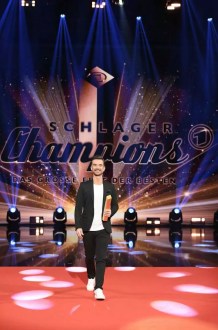 Schlagerchampions: Where did the NO ANGELS go? And: also announced...