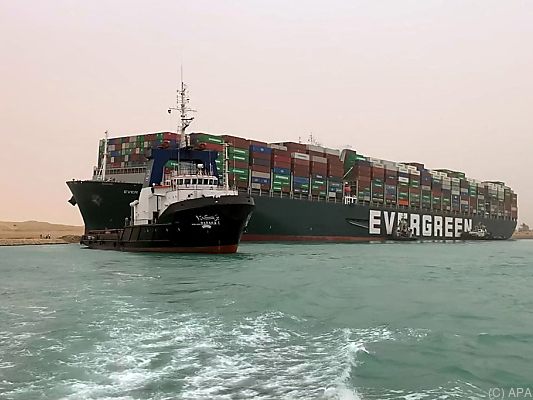 A crashed container ship continued to block the Suez Canal on Wednesday evening. Ten tugs initially tried in vain to free the approximately 400-meter-long ship from its banked position in one of the most important waterways in the world. The industry service provider GAC corrected earlier information in the afternoon, according to which the “Ever Given” had been partly made afloat again. The oil price also rose by about six percent because of the accident.

Photos showed how excavators tore earth and rock from the edge of the canal at the bow of the ship. According to an insider, the work should continue at night, as far as the weather permits. According to the authorities, the freighter ran aground on Tuesday because the captain had poor visibility due to a sand storm.

Pictures on social media showed that the freighter had turned sideways. The incident had blocked the important shipping route between Asia and Europe. According to the ship radars vesselfinder.com and marinetraffic.com, traffic jams from container ships formed both north and south of the canal. Shipping companies have reported more than 100 ships waiting in the canal to the insurance group Allianz.

The Suez Canal connects the Mediterranean with the Red Sea. According to Allianz, around ten percent of world trade goes through this channel. There are not many routes around the Suez Canal in shipping. It shortens the sea route from Europe to India by around 7,000 kilometers. That is important in tightly-timed world trade.

The Association of German Shipowners (VDR) hopes that the blockade will end as soon as possible. “The longer the lockdown lasts and the longer the uncertainty lasts, the more drastic the effects of this lockdown will be,” said association spokesman Christian Denso of the German press agency. The main problem is that nobody knows whether the detour around the southern tip of Africa is worthwhile. Ships are threatened with expensive and lengthy detours, warned the alliance.

The longer the traffic jam, “the quieter it will be in the Port of Hamburg,” said Denso. After that, however, the ships would come together. The “Ever Given” is no stranger to Hamburg. In 2019 it caused a collision with a ferry. There was damage to property amounting to around one million euros.

The Federation of German Industries warned of rising costs for companies that rely on sea transport. Supply chains stalled, among other things because of the unpunctual ships, said the deputy chief executive Holger Lösch. The situation in international container shipping is tense anyway, the blockade is now tightening it again.

According to the Suez Canal Authority, almost 19,000 ships passed through the canal in 2020, an average of around 50 a day. In the past, the US Energy Administration also spoke of a “critical bottleneck” for trading in oil, gas and petroleum products. This was also noticeable on Wednesday in oil prices – they rose sharply.

Merkel looks to the “breathless year” and invokes solidarity for 2021...

GruppeM Racing to enter DTM 2021: first team has been chosen!

Jasmin Herren: “I would have reacted differently in Giulia’s place”