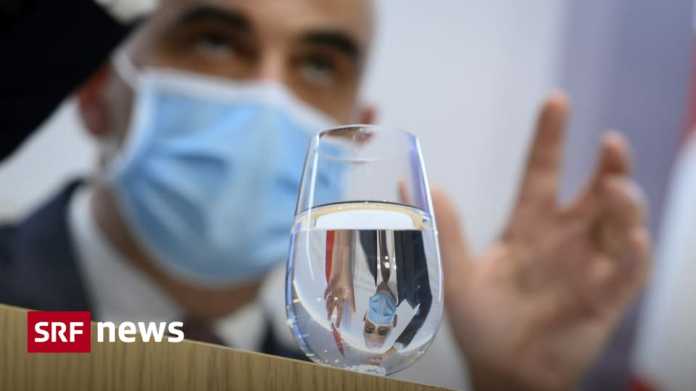 First the BAG declared that everyone would be vaccinated by the end of June. Now it’s the end of July. The Minister of Health explains.


Health Minister Alain Berset appeared in front of the media in Bern on Thursday after the vaccination summit with the cantons and representatives of the vaccine manufacturers Pfizer and Moderna. And he had good news in his luggage: the eight million doses of the highly effective vaccine that had been ordered could be delivered by July.

The disillusionment followed. Because a central statement of the media conference was: “By the end of July at the latest, everyone who wants this will receive at least one dose of vaccine.” Assuming that the vaccination doses will be delivered as advertised. The vaccine representatives assured this.

That made us prick up our ears, because up until now the rule was: all those willing to be vaccinated should be vaccinated by the end of June. This scenario remains “realistic,” said Berset at the media conference.

But those who had hoped for planning security for the summer holidays are left disappointed. There were clear words from politics: FDP National Councilor Marcel Dobler, for example, spoke of “bad news”.

In the “Saturday round-robin” broadcast by SRF Radio, the Minister of Health justified the various messages about the vaccination target by saying that there were different scenarios. “We can say precisely how many doses we can inoculate. But we don’t know exactly how many people want to be vaccinated. “

If this grows, that would be extremely good news, clarifies Berset. The downside: With full vaccination protection until the end of June, part of the population can currently not count on. Because forecasts of how many people want to be vaccinated by the summer remain difficult.

In addition, the cantons now also have to cope logistically with the largest vaccination campaign in Swiss history. So far, the cantons have shown that they are up to the task, according to the Federal Council. But: “The volumes will now increase very sharply.” From April, more opportunities are needed to have vaccinations.

Federal Councilor Berset gave the exact date for the introduction of self-tests in Switzerland to the “Saturday roundabout”: these should now be available from April 7th. “We are working with the cantons and pharmacies to make the appropriate preparations.” First of all, however, a certain shortage of supply is to be expected. “The situation will improve very quickly.” So far, the federal government had targeted the introduction of self-tests in mid-April.

So some things remain uncertain. But can we expect the corona nightmare to be over by summer? “That’s the hope, yes,” says Berset. Also in the knowledge of the imponderables and uncertainties that have become a reliable companion of the pandemic. One of them: The EU announced this week stricter export controls for vaccines that are manufactured on its territory.

Is Switzerland now also facing hardship? “At the moment I have no signals that Switzerland could be affected,” says Berset. The contacts with the EU are very good and there is a constant dialogue – also about a common European vaccination certificate.

But the health minister also says: “I hope that there will be no blockade and that we will not have to take any countermeasures. We could – but that would be a lose-lose situation for everyone. ”

Lufthansa & Co .: vaccine hope: is it worth buying airline...

Jan Hofer’s last “Tagesschau”: This is how the audience reacts