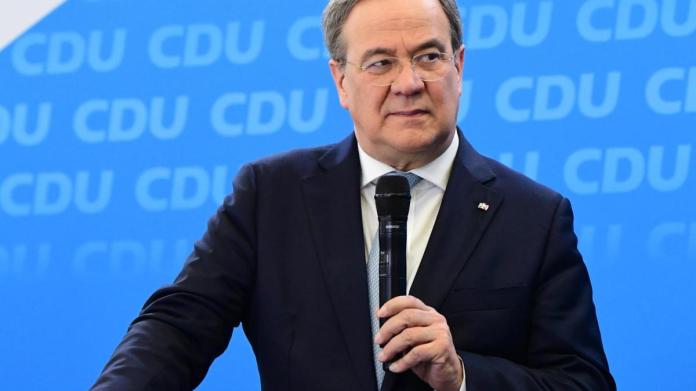 AArmin Laschet even changed one passage in his speech. The gender asterisk that has been included is hardly audible. Laschet hardly pauses when he says “Macher *innenland”. But it is also immediately clear in terms of content how it is meant.

Laschet had previously said “doers”, before he comes to one of his central statements: “Germany can offer first-class opportunities for our children and equal opportunities for women and men in our doers’ country.” That the new CDU party leader that has included politically, socially and linguistically controversial genders in his repertoire is remarkable – but by no means the most spectacular aspect of his first keynote address to the party.

The big question was whether and how the 60-year-old North Rhine-Westphalian Prime Minister reacts to the public criticism of Chancellor Angela Merkel (CDU) of his Corona crisis management.

Merkel had complained in the ARD talk show “Anne Will” that especially Berlin, North Rhine-Westphalia and Saarland did not strictly implement the emergency brake and overstretched the discretion of the federal-state resolutions. Merkel celebrated the rift at prime time on Sunday evening and shook the Union to the core.

Merkel at “Anne Will”

Chancellor and CDU party leader do not have a mere difference of opinion, but a serious fundamental conflict about how to deal with the pandemic. And that a few months before the federal election and a few weeks before the decision on the CDU and CSU’s candidate for chancellor. Laschet wants to secure the candidacy.

Now there is additional pressure on him after the CDU has literally crashed in just a few weeks to well below 30 percent in various surveys. The accusations of enrichment against several Union members of the Bundestag in business with protective masks have already seriously damaged the party, which has long been high in the public opinion.

The situation in the Union becomes even more complicated because Bavaria’s Prime Minister Markus Söder clearly supports Merkel’s position. Like the Chancellor, the CSU boss is calling for a stricter regime of measures. In hotspots, the agreed “emergency brake” must already apply over Easter, even with exit restrictions. Söder said on Tuesday in Munich that he was not sure whether everyone really understood the seriousness of the situation. This is easy to understand as an allusion to Laschet.

An open conflict between Söder and Laschet comes at the worst possible time: Both want to clarify the top candidacy for the Union after Easter. One is dependent on the other in order to have any chance of success.

Self-tearing is fundamentally harmful for a party, but Laschet does not want to give in now either. Viewed positively, the Chancellor, supported by Söder, offers him a welcome opportunity to distance himself from her and to show his own profile.

Turning away from the course as a “male Merkel”

The day after Merkel’s memorable TV appearance, Laschet defended his approach in the pandemic: North Rhine-Westphalia allows districts and large cities to open within seven days, even with an incidence value of more than 100 new infections per 100,000 inhabitants, if the municipalities consistently and comprehensively with rapid tests work.

In his press statement after the meeting of the CDU presidium on Monday, Laschet warned that the federal government and the state should not point their fingers at each other.

On Tuesday he will try his first keynote address on the planned program for the federal election in the Konrad-Adenauer-Haus to get on the offensive. Many statements are known from interviews, speeches and application rounds over the past few months – but in the new context and the open conflict with the Chancellor, they become even more explosive.

The 25-minute speech to the party can be understood as a move away from the Chancellor. For years, Laschet acted as Merkel’s Praetorian and defended her vehemently, especially in the refugee crisis. He was seen as a “keep it up” candidate in the competition for party chairmanship, as a male Merkel, as “Germany’s next mom”, as Laschet himself once humorously described it in a carnival speech.

It has been over since last weekend at the latest. “There must not be a continuation of this. The mistakes that are recognizable have to be tackled now, ”said Laschet in his keynote address on Tuesday. In terms of content, he relates this to the digital and technological backwardness and bureaucracy in Germany, which have become particularly evident in the fight against pandemics.

The “no more so” motto can also be understood as the political emancipation of Merkel, which Laschet had recently certified as having the “tools” for the candidacy for chancellor.

Laschet also specifically mentions major failings by the federal government: “We would all have wanted faster vaccinations and more vaccines, more options through more tests, better digital contact tracking.” The CDU party leader makes a great promise in this context: “We will change that.” . We’ll do better. I personally vouch for that. ”With this, Laschet explicitly takes personal responsibility for the development in the coming months.

Laschet confirms once again that he is relying more on federalism and subsidiarity than on a model that is more centered on the federal government – that is also a lesson from the pandemic. “You cannot regulate centrally from the top down to the last institution who can be vaccinated, where, when, and which forms have to be filled out. We have to trust those who do this on site more, allow more freedom and more flexibility. ”With this, Laschet is diametrically opposed to Merkel’s position, who believes that more federal level responsibilities are useful in fighting pandemics if the federal states do not follow her course.

Laschet complains about the slowness of Germany, which became abundantly clear in the fight against the pandemic, and calls for a “decade of modernization” and a “cultural change”. It is “not the one app that we lack. It is not one health department that has problems with implementation. It’s not the one state that isn’t strong on digital education. Overall, we are not strong enough to shape this decade of modernization with the previous one. “

Germany has “become too comfortable in the last few years”, one has to “stop managing and start shaping”. Laschet does not even mention Merkel’s name, but when he speaks of the failures of the “last few years”, he also means her almost 16-year reign.

A “rising republic” with “climate prosperity”

Otherwise Laschet shows his political connection to the FDP and the Greens. He repeatedly talks about “freedom”, also with reference to the pandemic, which the free democrats in particular are demanding all the more louder with a corresponding protection strategy in times of fundamental rights restrictions and lockdown phases. Like Konrad Adenauer before, Laschet warns of “left-wing experiments” and red-red-green and promises a climate-neutral Germany with market-based instruments.

Germany and Europe should once again become the “pharmacy of the world” and Germany should become the world’s first location for the carbon dioxide-free production of green steel with hydrogen. The economy is the “engine of opportunity for ecology”.

Laschet wants a “rising republic” in which more people with a migration background like Biontech founders Ugur Sahin and Özlem Türeci are successful. Then he even uses the rhetoric of the extra-parliamentary eco-opposition: “I want climate prosperity. That means that we are leaving a better world behind than we found. ”Laschet later says that“ climate prosperity ”is a beautiful word that coined Fridays for Future.

With his speech he presented the farewell to the Merkel era – but he remains true to her political embrace strategy.

“It will start in January”: Merkel has no doubts about the...