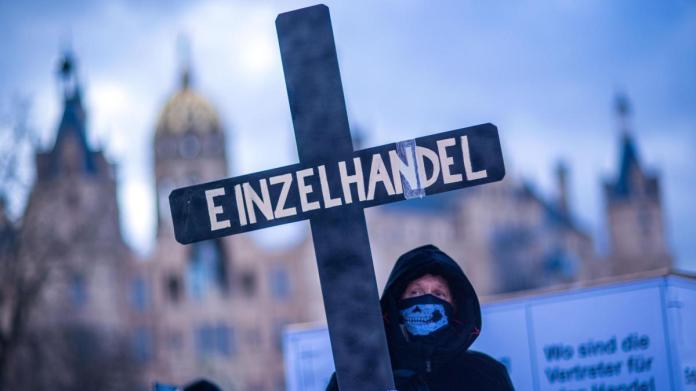 In order for insurers to protect retailers from unpaid bills and outstanding claims, the federal government has put up a protective shield worth billions. But the deal should end in the summer. The trade is appalled. The situation could escalate in the second half of the year.

Gerd Oliver Seidensticker is worried about the fashion industry in Germany. “If it was ever risky to be a clothing entrepreneur, then it is now,” says the managing partner of the shirt manufacturer of the same name from East Westphalia. Indeed, the lockdown-plagued industry is currently down. Hundreds of millions of unsold parts pile up in stores and warehouses.

The risk of insolvency for manufacturers and retailers of fashion and textiles is correspondingly high, warn experts. And now it’s getting bigger. Because from July the protective shield for so-called trade credit insurance will no longer apply in this country. “That makes business more difficult and makes entrepreneurship in the fashion industry even more risky.”

Trade credit insurance protects companies from unpaid invoices or outstanding claims. Before such a policy is granted, however, the insurance company checks the creditworthiness of the customers who order the goods. In times of pandemics, however, it does not look rosy for many companies. So that providers such as Euler Hermes, Atradius, Coface or R + V still secure deliveries and trade works, the work of credit insurers has been stabilized by a guarantee from the federal government since spring 2020. At least 30 billion euros are available for this.

“Together, the federal government and credit insurers have achieved the goal associated with the protective shield of maintaining the supply chains of the German economy endangered in the wake of the corona pandemic. In the current economic environment, a collapse of the supply chains – also thanks to the extensive and targeted support measures of the federal government for the German economy – is no longer to be feared, ”explains Asmussen. This eliminates the original purpose. “Insurance protection can and should again be provided exclusively on the basis of market economy principles.”

As a consequence, this means that trade credit insurance will become more expensive in the second half of the year. And for a number of transactions, there should also no longer be any protection at all. “It may be that certain retailers no longer receive goods from their suppliers,” fears textile entrepreneur Seidensticker, who is also president of the German fashion industry association, German Fashion.

Even orders would not be accepted by the industry without collateral. Alternatively, payment in advance can also be agreed. Due to the lockdown, however, a number of companies have little liquidity. Stationary non-food retailers in Germany in particular are likely to have problems. And not just in the fashion segment.

The trade is horrified. “The protective shield must be continued”, demands Stefan Genth, the chief executive of the Handelsverband Deutschland (HDE). Trade credit insurance is still important for non-food retailers. The HDE has repeatedly made this clear in discussions with the Federal Ministry of Economics and the Federal Ministry of Finance.

Credit insurers in this country are currently maintaining limits of around 400 billion euros, as reported by the GDV. The state insurance cushions the increased risk due to the pandemic. Damages are divided in a ratio of 90:10. That means: the federal government pays 90 percent, the credit insurers pay 10 percent. However, this safety net is expensive: in 2020, the corporations had to surrender 65 percent of their premium income to the federal government, in the first half of 2021 it was 58.5 percent.

The business is no longer lucrative, say experts. The now announced departure of the insurers is not surprising. “We are already offering our customers solutions for the time after the end of the protective shield, so that they have the greatest possible transparency and planning security,” says market leader Euler Hermes, which belongs to the Allianz Group.

A spokeswoman does not want to reveal what solutions these are. To do this, she tries to encourage courage. “We expect many companies to recover by the summer.” The experts at Euler Hermes even speak of a “catch-up boom”. However, there will be cases in which coverage cannot be fully maintained.

This is also made clear by forecasts from competitor Coface. The company estimates the risk of hidden bankruptcies – meaning bankruptcies that have been prevented by government measures so far – at 21 percent, based on the insolvency figures of 2019. In total, that is almost 4,000 cases, calculates Coface economist Christiane von Berg. Now there is a significant increase in insolvencies, especially in the hospitality and transport industries, as the Coface model calculation shows. When this increase will actually take place, however, is uncertain because the state aid will continue.

The verdict in the William W. case has been ruled: no...