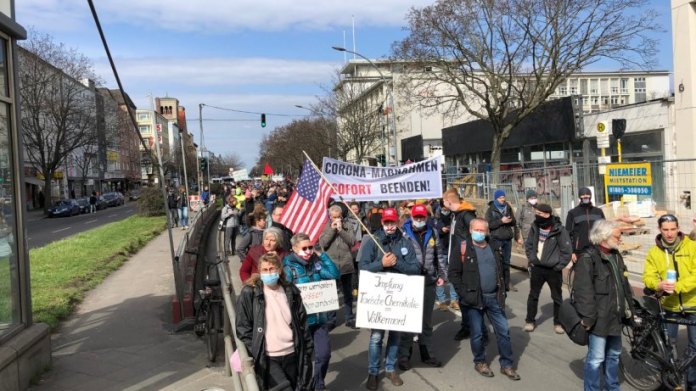 Corona demo pulls through the middle

Several counter-demonstrations have been announced, including a bicycle parade. Our reporter reports live from the demo.

Berlin. A few hundred people demonstrated against the Corona measures in Berlin on Sunday. They want to move from Max-Joseph-Metzger-Platz in Wedding to Rosa-Luxemburg-Platz, where a final rally will take place. Several counter-demonstrations have been announced, including a rally on Nettelbeckplatz and a bicycle parade.

Our reporter reports live from the demo:

1:29 p.m .: Police officers and security staff protect the vaccination center in the Erika-Heß-Eisstadion in Wedding. The march of the people who played down the corona passes by, one demonstrator even tries to approach the stewards, but is prevented by the police.

1:11 p.m .: The demonstration has started from Max-Joseph-Metzger-Platz. The people who played down the corona want to go to Rosa-Luxemburg-Platz via Reinickendorfer Straße. At an interim rally on Reinickendorfer Strasse, a speaker criticized the test strategy of the State of Berlin and called for all measures to be withdrawn. The police meanwhile allow taxis to access the vaccination center in Erika-Heß-Eisstadion.

12.40 p.m .: Even before the start of the demonstration, only some of them adhere to the requirements, such as wearing mouth and nose protection and keeping clearances. Police officers run through the crowd and speak to protesters. On the stage, among others, is the corona-belittled Captain Future.

Working in Covid times: The “silent heroes” in the Salzkammergut clinics...

News from Germany: Fireman goes to the dentist and reanimates another...