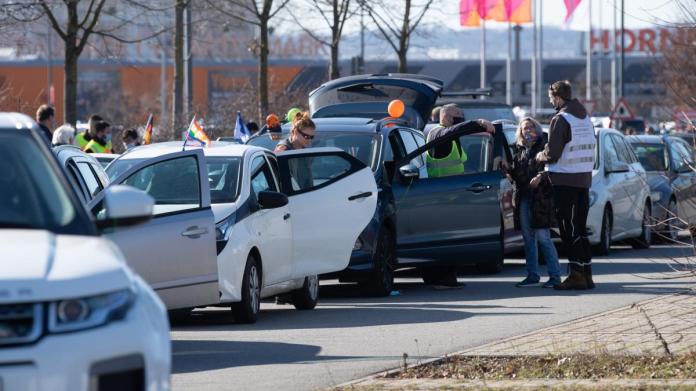 Corona demo planned – motorcade on the way to Leipzig slowed down

The police in Leipzig are gearing up for a large-scale operation: car corsos are rolling into the city from several locations in Eastern Germany to demonstrate against the Corona measures. In November, a “lateral thinker” demo got out of hand here.

Se from lunchtime, critics of the corona measures from Saxony and Saxony-Anhalt have been in car corsos on their way to Leipzig. However, according to the police, the number of participants was significantly lower than expected.

Several counter-demonstrations have been announced in Leipzig – the police have prepared for a large-scale operation. For example, she was in an armored vehicle at the fair, where there is a vaccination center.

In Limbach-Oberfrohna (district of Zwickau), around 100 people came together in the morning, as the Zwickau police department informed. In contrast, a parade that was supposed to start in Plauen was canceled by the organizer for personal reasons. For this purpose, around 200 participants had been advised by the assembly authority.

The first drivers also met in Dresden – the parade was supposed to start there at noon. Three motorcades from Saxony-Anhalt wanted to make their way to Leipzig – according to information from the local situation center, around 300 vehicles were registered – including from Naumburg.

In Halle, 100 people prevented the vehicles from gathering in the city area, some of them by force, according to a spokeswoman for the Halle police. “The formation of a vehicle column did not take place.” Then some motorists would have joined a parade from Merseburg (Saalekreis), others would “certainly also individually” on the way to Leipzig, she said.

The police had taken “measures” against the counter-demonstrators, and a helicopter was also in use. Property damage had occurred on both sides, it said.

In Leipzig, an alliance of associations, initiatives, parties and unions wants to oppose the opponents of the Corona rules. Among other things, the counter-protest has announced a rally with 1000 participants on Augustusplatz as well as several bicycle and vehicle parades under the motto “slow down lateral thinking”.

A rally originally planned from the “lateral thinking” environment at the Leipzig New Fair with more than 1000 registered cars has since been canceled. The counter-demonstrators therefore fear that the opponents of the Corona measures could again target the inner city ring.

There, on November 7, 2020, tens of thousands of supporters of the movement broke police barriers and marched around the ring without permission and in disregard of the Corona rules. Several police officers and journalists were attacked and some were injured. There were several arrests.

Heiko Maas is the first to fly the Airbus A350

Illegal party in Essen: Embolo probably fled over the roof

Full non-relegation bonus as a lure? Winless squires are looking...