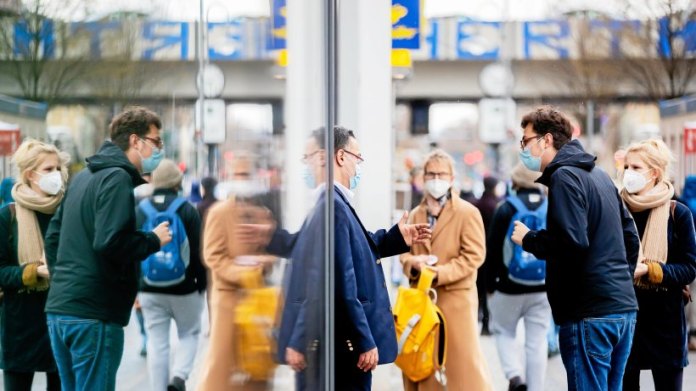 Shopping in Berlin only with a corona test

Anyone who wants to shop in Berlin will need a negative corona test in the future. However, the new rule does not apply to supermarkets.

Berlin. Despite rising corona numbers and the increasing spread of the more dangerous British virus variant, the Berlin Senate is not taking back the recent easing of the corona measures. But he wants to protect them by significantly expanding corona tests. The governing mayor Michael Müller (SPD) and his deputies Klaus Lederer (left) and Ramona Pop (green) announced this on Saturday after a special session of the Senate.

From Wednesday, a negative corona test is required for every Berliner in order to be able to go shopping in stores. This also applies to visits to the hairdresser and museums, but not to so-called system-relevant trading structures such as supermarkets, pharmacies or drugstores, which were always open even during lockdown. An appointment booking for shopping is no longer necessary, but the maximum number of customers still applies.

The Berlin-Brandenburg Trade Association (HBB) reacted with satisfaction to the decisions: With the new regulation, retailers would have the opportunity to open their shops properly. “The need to stroll from shop to shop is also more tangible among customers,” said HBB Managing Director Nils Busch-Petersen of the Berliner Morgenpost. Customers could get tested for Corona in a pharmacy in the morning and then go to a shopping center. “I think this is progress and much better than ‘click and meet'”, he said.

The governing mayor Michael Müller (SPD) emphasized that despite the increasing number of infections, the decision was not made to close everything again. But one wants to react to the dangerous contacts in the private and professional environment. Nothing should change in the current contact restrictions. Meetings with five people from two households are also allowed over Easter, plus children under 14 years of age.

However, Müller appealed to reduce contacts over the holidays: “Incidences and risks are increasing and we have to react to this together. Everyone is asked to be aware that something can be done to protect themselves and others. “

There are stricter rules for companies. According to Müller, you will be obliged to enable your employees to have a corona test twice a week in the future. There is no compulsory test for employees. In addition, the Senate wants companies to work from home because the nationwide rules are not enough for them. Accordingly, companies should offer 50 percent of their office workplaces in the home office in the future. This is intended to significantly increase the proportion of employees who no longer have to commute to work but work at home. This could reduce contacts and slow down the corona pandemic, it said.

The Berlin economy criticized the decisions in an initial reaction. “We doubt that the Senate’s resolution on a 50 percent presence in companies makes a significant contribution,” said the President of the Berlin Chamber of Commerce and Industry (IHK), Beatrice Kramm. Rather, with its bureaucratic requirements, it creates additional burdens and uncertainty among companies and employees. In addition, there is the question of the practical verifiability of the new regulations, already now the existing rules, for example on contact restrictions, are not being controlled in the way that would be necessary to contain the pandemic. In addition, the question arises of the feasibility of the 50 percent rule if more than half of the employees in a company reject the home office offer, according to Kramm.

Federal Minister of Health Jens Spahn (CDU) had previously pleaded for a renewed lockdown in view of the rapidly increasing number of coronavirus infections. “If we take the numbers, including today’s developments, we actually need another ten or 14 days at least to shut down our contacts and our mobility properly,” said the politician on Saturday at an online discussion event organized by the federal government where citizens asked questions could ask.

The state of Brandenburg wants to tighten its corona rules for Easter. The State Chancellery in Potsdam announced that there should be a nightly exit restriction from April 1 to April 6 with an incidence of 100 or more on three days in a row. Exceptions for good reason are possible as in winter, it said. The cabinet agreed on Friday, and the decision is expected to be made next Tuesday. The exit restriction should apply from Maundy Thursday to Tuesday after Easter from 10 p.m. to 5 a.m. in the districts and urban districts that are above the value 100.

Monolith in Utah – metal pillar in the desert puzzles

Brazil: Mother locks up children and goes to party

Coronavirus: Israel has already vaccinated more than a million people