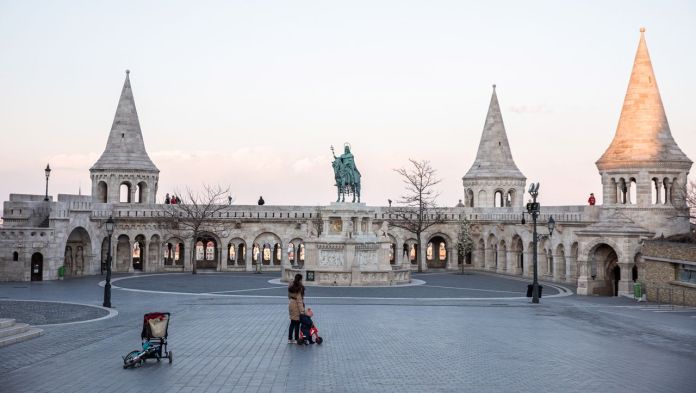 The National Stadium in Warsaw on the eastern side of the Vistula is actually a triumphal building. It was built in 2012 when Poland, recovered from war and communism, invited the world to the European Football Championship.
Today the national stadium of the Polish capital is an emergency hospital for corona patients. “It’s like a war here,” a doctor told TVN24. On Friday, Poland recorded the most new infections since the pandemic began, with more than 35,000 cases. Ascending trend. Experts have extrapolated that 25,000 people could still die from the virus by July.
After Eastern Europe got through the first wave with radical lockdown rules and rapid border closings, the second and third hit hard. The incidence value in Poland is currently 450, in the Czech Republic 526, Hungary even reaches 665. “If this continues, Europe will not remember Bergamo but a Hungarian city as a harrowing example of the destructive power of the coronavirus,” said a doctor the Budapest weekly newspaper »hvg«.
The reasons for this development can hardly be clearly identified. Perhaps, sociologists speculate, Eastern Europeans do not stick to the rules so strictly; Eastern European migrant workers probably introduced the British virus variant particularly early, and Eastern Europeans may go to the doctor later than their Western EU citizens.

Because between Tallinn and Sofia the number of deaths is high relative to the population. Last week, the government had 25,000 white crosses painted on the pavement in Prague’s old town, one for each corona death.

»Poland is experiencing the most difficult moment in 13 months«

“Poland is experiencing its most difficult moment in 13 months,” said Prime Minister Mateusz Morawiecki recently. 75 percent of the intensive care beds in hospitals are occupied: “The bottleneck is not with the ventilators, but with doctors, nurses and nurses.” Thousands of them have moved from Eastern Europe to the West in recent years because they are better paid there, than in the chronically underfunded health systems of the new EU countries.

As in the Czech Republic, Slovakia and Hungary, Poland is trying to get the virus under control primarily with strict lockdown measures: closed bars, hotels, restaurants, shopping centers. In the Czech Republic, nobody is allowed to leave their district without good reason.

But the virus continues to rage. Social scientists suspect that many in Eastern Europe do not adhere to the restrictions very consistently.

A new government under Igor Matovič had started to clean up corruption. During the pandemic, she had almost the entire population tested twice. The third wave hasn’t distracted – and now the government is dismantling the question of vaccination strategy.

Like Hungary, Slovakia did not wait for the vaccines, but introduced the Russian vaccine Sputnik V. Budapest even awards the Chinese substance – even though both agents have not yet been officially approved by the EU authorities. But even the relatively high vaccination rates achieved as a result hardly seem to slow down the virus so far.

Another problem is that Eastern Europeans tend to go to the doctor much later than the EU average. Scientists suspect that people prefer to rely on home remedies, because the health system still has a bad reputation in many places: It is notoriously underfunded – and therefore also corrupt. Doctors and nurses, for example, have the reputation in many places of paying extra for preferential treatment.

Virologists see another reason for the explosion of the pandemic in the massive migration from east to west – which is regularly reversed around Christmas. Hundreds of thousands of Poles work in Great Britain, where the dangerous virus variant B was up to mischief before the holidays. “Letting thousands of them into the country without tests for Christmas was irresponsible on our part,” says epidemiologist Maria Gańczak.

Hope for a new start with EU billions

It is noticeable that the corona frustration is directed primarily against the national authorities everywhere, but the EU is not really given negative credit for the vaccination debacle – although the governments in Hungary or Poland, for example, definitely specify a climate critical to the EU.

The reason for this reluctance is certainly the expected corona millions from Brussels. Despite the fatal pandemic development, the economies of the Eastern countries are doing comparatively well. In January, for example, Poland was the country with the lowest unemployment rate within the OECD (3.1 percent), while the Czech Republic took second place (3.2 percent). According to economists, the growth in Eastern Europe is hardly based on tourism and relatively little on the – largely closed – service sector, but rather on industrial production. And it goes on.

The conditions for a new start are therefore good, especially with the billions from the Corona recovery fund. Poland alone accounts for 32 billion euros in loans and 21 billion euros in grants. Warsaw must spend this on “institutions, investments, innovation, immigration and inclusion,” says Marcin Piątkowski, an economist at the World Bank. Corona could therefore chase a surge in economic modernization through the country: It was the greatest “opportunity in a thousand-year history to catch up with the West.”

What the EU and Great Britain have agreed on

Good reasons for a trip to the Harz Mountains

Mark Forster is now back with an Instagram photo – but...

Spring as the enemy of corona?