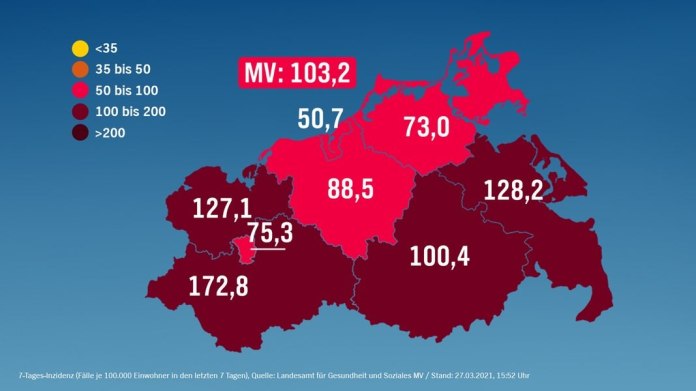 The number of registered new corona infections has increased by 272 cases in Mecklenburg-Western Pomerania since Friday (as of Saturday 3:52 p.m.). That’s 40 more infections than on Saturday a week ago. Overall, the State Office for Health and Social Affairs (LAGuS) reported 29,783 infections in the country since March 2020. According to an estimate by the Robert Koch Institute (RKI), 25,817 (+183) of the people who tested positive in Mecklenburg-Western Pomerania have recovered from Covid 19 disease. The number of deaths in the northeast is 846 (+3). According to the LAGuS, as of Friday, 218,809 vaccine doses have been administered in the northeast. According to this, 149,104 people received a first vaccination (vaccination rate 9.27 percent), 69,705 also the second (vaccination rate 4.33 percent).

Currently 245 people with Covid-19 in the hospital

According to the latest figures from the LAGuS and the Ministry of Health, 245 (+ -11) people across the country are currently being treated for Covid-19 in a hospital, 61 (+ -0) of them are in intensive care. According to the intensive care register, 40 (+1) Covid-19 patients are ventilated invasively. The register shows 514 occupied and 110 free intensive care beds for Mecklenburg-Western Pomerania (as of Saturday 3:19 p.m.).

79 new infections in the Vorpommern-Greifswald district

According to the LAGuS, most of the infected were or are in the district of Vorpommern-Greifswald with 6,999 (+79) infections so far. There are a total of 5,984 (+27) cases in the Mecklenburg Lake District. So far there have been 4,795 (+65) infections in the Ludwigslust-Parchim district. 2,895 (+28) infections were reported in the Rostock district. In the district of Northwest Mecklenburg, the authorities registered 2,755 (+33) people who were verifiably infected with the corona virus. The LAGuS reports 2,610 (+14) cases for the district of Vorpommern-Rügen. The state capital Schwerin continues to have the lowest total numbers with 1,966 (+10) and the Hanseatic city of Rostock with 1,779 (+16) cases.

The LAGuS’s daily corona statistics only record people who have their primary residence in Mecklenburg-Western Pomerania. The LAGuS also publishes regular reports on infections among guests. These are all those people who have been found to be infected in Mecklenburg-Western Pomerania, but who do not have a primary residence in the state.

The NDR will then broadcast the results of the consultations and an evaluation live here. more

Netflix Record: This series has received millions of clicks in a...

Corona numbers are increasing – R value has been at its...

PS5: Indian gamers revolt against scalpers – and with success