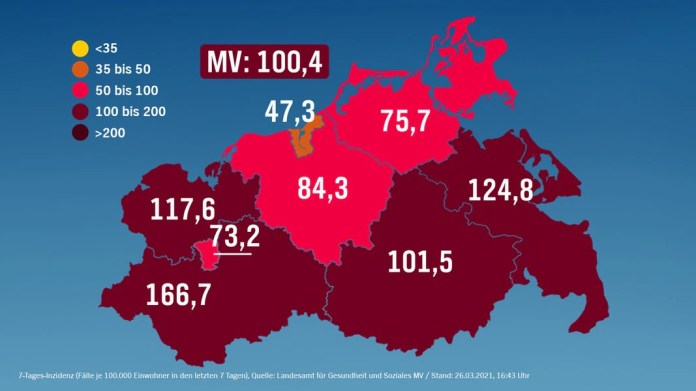 The number of registered new corona infections has increased by 345 cases in Mecklenburg-Western Pomerania since Thursday (as of Friday 4:43 p.m.). That is 113 infections more than on Friday a week ago. Overall, the State Office for Health and Social Affairs (LAGuS) reported 29,511 infections in the country since March 2020. According to an estimate by the Robert Koch Institute (RKI), 25,634 (+163) of the people who tested positive in Mecklenburg-Western Pomerania have recovered from Covid 19 disease. The number of deaths in the northeast is 843 (+1). According to the LAGuS, as of Friday, 218,809 vaccine doses have been administered in the northeast. According to this, 149,104 people received a first vaccination (vaccination rate 9.27 percent), 69,705 also the second (vaccination rate 4.33 percent).

Currently 234 people with Covid-19 in the hospital

90 new infections in the Vorpommern-Greifswald district

According to the LAGuS, most of the infected were or are in the district of Vorpommern-Greifswald with 6,920 (+90) infections so far. In the Mecklenburg Lake District there are a total of 5,957 (+52) cases. So far there have been 4,730 (+64) infections in the Ludwigslust-Parchim district. 2,867 (+29) infections were reported in the Rostock district. In the district of Northwest Mecklenburg, the authorities registered 2,722 (+41) people who were verifiably infected with the corona virus. The LAGuS reports 2,596 (+48) cases for the district of Vorpommern-Rügen. The state capital Schwerin continues to have the lowest total numbers with 1,956 (+7) and the Hanseatic city of Rostock with 1,763 (+14) cases.

How to deal with rising incidences? Today the MV summit is advising – also about easing after Easter. Ndr.de will broadcast the statements live after the talks. more

The reason is the sharp increase in the number of infections. The rule is initially valid until April 7th. more

“We can now go further step by step with the vaccinations,” said Health Minister Glawe. more

Decline after 14 years: Corona stops upward trend in the labor...

K question at the Union: Merz open to later decision New government in Yemen sworn in – power struggle to be...

Bloody clan dispute in Berlin! Explosive: The victim is the...

Over 250 arrests on terrorist charges in Turkey

kika / Leiner want to catch up in online retail