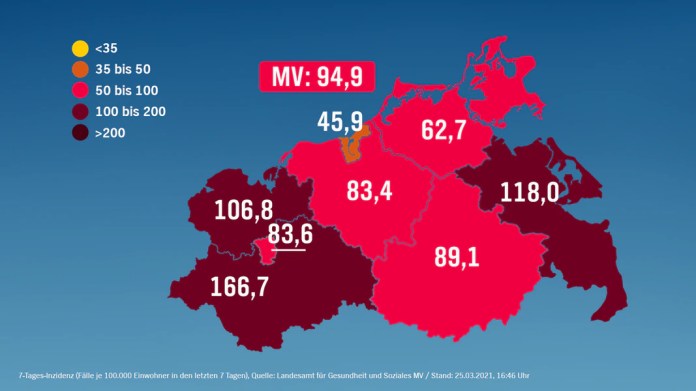 The number of registered new corona infections has risen by 383 cases in Mecklenburg-Western Pomerania since Wednesday (as of Thursday 4:46 p.m.). That is 195 more infections than on Thursday a week ago. Overall, the State Office for Health and Social Affairs (LAGuS) reported 29,166 infections in the country since March 2020. According to an estimate by the Robert Koch Institute (RKI), 25,471 (+139) of the people who tested positive in Mecklenburg-Western Pomerania have recovered from Covid 19 disease. The number of deaths in the northeast is 842 (+4). According to the LAGuS, as of Thursday, 211,466 vaccine doses have been administered in the northeast. According to this, 143,656 people received a first vaccination (vaccination rate 8.93 percent), 67,810 also the second (vaccination rate 4.22 percent).

The incidence value in MV is now 94.9

Currently 234 people with Covid-19 in hospital

96 new infections in the Ludwigslust-Parchim district

According to the LAGuS, most of the infected were or are in the district of Vorpommern-Greifswald, with 6,830 (+81) infections so far. There are a total of 5,905 (+38) cases in the Mecklenburg Lake District. So far there have been 4,666 (+96) infections in the Ludwigslust-Parchim district. 2,838 (+40) infections were reported in the Rostock district. In the district of Northwest Mecklenburg, the authorities registered 2,681 (+42) people who were verifiably infected with the corona virus. The LAGuS reports 2,548 (+36) cases for the district of Vorpommern-Rügen. The state capital Schwerin continues to have the lowest total numbers with 1,949 (+12) and the Hanseatic city of Rostock with 1,749 (+38) cases.

22 infection incidents at daycare centers and after-school care centers, 25 at schools in MV

The reason is the sharp increase in the number of infections. The rule is initially valid until April 7th. more

“We can now go further step by step with the vaccinations,” said Health Minister Glawe. more

According to Unimedizin, there are indications of a connection with an AstraZeneca vaccination. However, this has not yet been finally clarified. more

The Prime Minister defends her strategy in the Corona crisis. The protesters are calling for an end to the closings. more

This is the first family photo with all 3 children

EU approves corona vaccine: you need to know that now Suction dredger and full moon are supposed to free “Ever Given”... 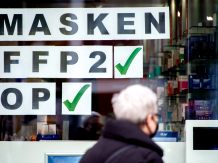 FFP2 masks free for those in need, price unclear for others...

The federal and state governments have decided