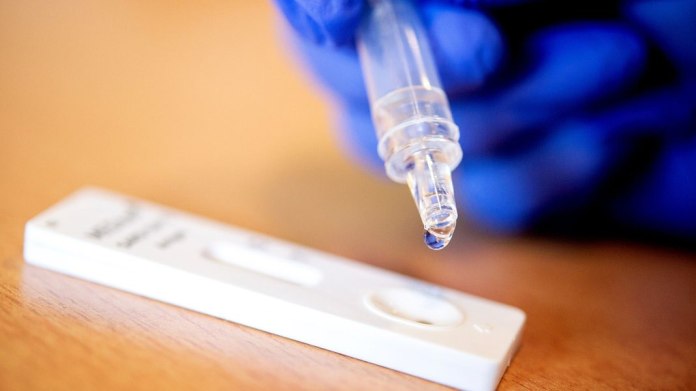 At the MV summit at the end of March, the state government in Schwerin discussed the next steps in the corona pandemic and the implementation of the federal-state resolutions with representatives of municipalities, trade unions, social associations and business. With an obligation to test when shopping, Prime Minister Manuela Schwesig (SPD) hopes to be able to keep the openings that have taken place so far despite the currently increasing number of infections. The districts and urban districts have now set up a network of more than 150 quick test options. A map is available on the website of the Ministry of Economics, Labor and Health. The map is not complete, but according to the ministry it is updated regularly.

From March 31, a visit to the hairdresser or body-hugging services in Mecklenburg-Western Pomerania is only possible with a negative corona rapid test. From April 6th, a negative test must also be shown when shopping, which must not be older than 24 hours, as Schwesig said. In Rostock, this should only apply from April 10th. These tests should continue to be possible free of charge at least once a week. Nationwide, grocery stores, drugstores, pharmacies, gas stations, weekly markets, flower and book shops and garden centers are exempt from the obligation to test. The country plans to order another two million rapid tests in the coming week. In addition, work is being done to ensure that negative test results at the workplace can also be used for shopping or visiting the hairdresser, said Health Minister Harry Glawe (CDU) after the MV summit on Saturday.

After the Easter holidays, students and teachers in the country can do a Corona self-test twice a week. Previously, the tests were only provided once a week in schools. In addition, it should be possible in the future to take the test at home instead of at the beginning of a school day in class. That would then have to be decided by the respective school conference, according to a letter from Education Minister Bettina Martin (SPD) to the schools in the country last Friday. A combination of both locations is therefore also possible. Since March 17, schools in Mecklenburg-Western Pomerania have been offering teachers, students and school staff Corona self-tests to make classroom teaching safer during the pandemic. On the first two school days after the Easter break, the previous rules should remain. How things will proceed from April 12th will be discussed in the coming week.

The previously applicable contact restrictions will not be relaxed at Easter. Private visits should, if possible, be secured by quick tests or self-tests. Worship services are still possible under hygiene rules. In retirement and nursing homes, the mandatory tests for visitors and employees will be strictly maintained, according to the Ministry of Social Affairs.

Model projects from mid-April in the districts

From mid-April there will be a model project per district or urban district, which will then last two to three weeks. Negative test results are a prerequisite for the participants. The projects need the approval of the Ministry of Health. It is not yet known what exactly will be tested in these projects.

The country’s incidence value rose to 106.3. Most of the new infections were in the Mecklenburg Lake District. more

More test centers are to come

According to the Ministry of Health, at least 16 municipal institutions and 106 pharmacies were offering the so-called citizen tests by the end of March. The municipal test centers were supported by aid organizations such as the DRK, Johanniter Unfallhilfe or the Maltese. Health Minister Glawe recently appealed to the municipalities to set up additional centers. Everything must be done to make the network even tighter, said Glawe. There are also test centers at the clinics in Stralsund, Schwerin, Greifswald and Rostock.

Commuters from Poland can be tested faster and cheaper than before. Such facilities already exist in many places across the country. more

Fast tests for commuters from Poland

At the German-Polish border crossing in Linken there has been a corona rapid test center since March 13, a second followed a few days later in Ahlbeck on Usedom. Commuters from Poland can be tested there. Anyone who has to cross the German-Polish border to work still needs a negative rapid test every two days. Commuters book an appointment via the Internet. At the test center, the swab is then carried out by trained staff on the window, the tested person can continue to work and receives the result by email. Most recently, the tests cost 10 euros for commuters and 20 euros for everyone else. One test per person per week was free.

The district of Northwest Mecklenburg put three rapid test stations into operation on March 12th: in Wismar (Am Alten Hafen), in Grevesmühlen (Rot-Kreuz-Speicher, August-Bebel-Str. 51) and in Gadebusch (market square in front of the town hall, Am Markt 1). Everyone who lives in the district can be tested for the corona virus free of charge there. This is normally possible Monday to Saturday, but those entitled should prepare for longer waiting times.

The “patchwork quilt” of the state rules is not helpful, said Hamburg’s mayor. More corona news in the live ticker. more

The Ludwigslust-Parchim district has also been expanding its network of municipal rapid test centers since March 15. Ludwigslust (in the Zebef eV on Alexandrinenplatz), Parchim (in the gable house) and Lübenheen (in the community center) made the start. Further facilities are to follow. The aim is to be able to make appropriate offers to the people in every office or city in the district, according to the district.

No extra facilities in Schwerin

The state capital Schwerin, on the other hand, has not yet wanted to build a municipal infrastructure for rapid tests. This should mainly be done by pharmacies. There is also a private test center, according to a spokeswoman. According to the municipal press office, the city of Rostock had not yet made a decision at the beginning of March. There are already several pharmacies that offer this service. Whether the need actually justifies its own center with the use of communal resources is still to be decided.

Lake District: Tests only in pharmacies or doctor’s offices

The Mecklenburg Lake District district has not yet set up its own rapid test centers. If you want to do a free quick test, you can have it done in pharmacies or doctors’ offices, according to a spokeswoman. The district was also in talks with providers of social institutions with the request that they agree to set up additional bases for rapid tests.

The organizer has developed a corresponding test concept. However, the prerequisite is that the number of infections decreases. more

Since Monday everyone should be able to be tested once a week free of charge, also in pharmacies. But they don’t even know how. more

Commuters and schoolchildren can soon be tested for the corona virus at two border crossings. more

In the primary school in Bansin, holidaymakers and locals can get a test for 59 euros. more

“No close friends” – Nadal reveals what he would never tell...