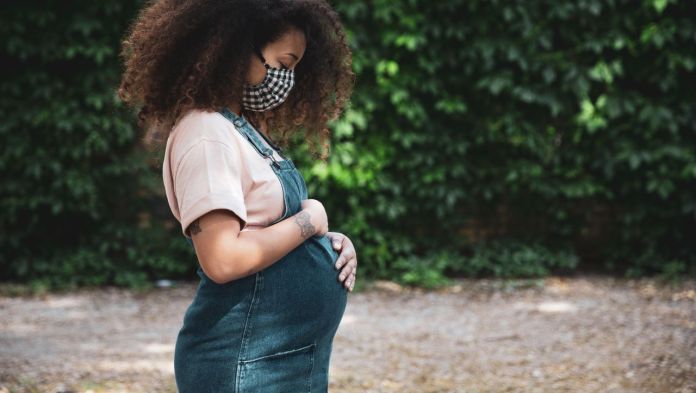 Is the child healthy? How painful is childbirth really? Will I be a good father Even without a pandemic, many parents-to-be ask themselves worried questions. The corona crisis has now added more.
At the beginning of the pandemic, the virus was not considered particularly dangerous for pregnant women. After all, many expectant mothers are young and healthy. A year later, it is now evident: Pregnant women have a higher risk of developing Covid-19 severely than their peers who are not expecting a child.
According to experts, this is not a cause for panic, but caution is advisable. Expectant parents should therefore avoid infection as much as possible. Mainly because pregnant women should initially only be vaccinated in exceptional cases because the vaccines have not yet been adequately tested on them.

However, initial analyzes are promising. Accordingly, corona vaccinations could apparently not only reliably protect the mother. The antibodies formed after the vaccination are also transferred to the unborn child in the womb. Antibodies can also be detected in breast milk, doctors report in the American Journal of Obstetrics and Gynecology. The study is considered to be the most extensive on the subject to date.

The research team examined a total of 121 women – 84 of them were pregnant and another 31 were breastfeeding. The remaining 16 served as a comparison group and were neither expecting nor breastfeeding.
All women were immunized with the mRNA vaccines from Biontech or Moderna and had then produced comparable levels of antibodies. There were seldom side effects; these occurred with about the same frequency in all women. An indication that pregnant and breastfeeding women tolerate the vaccination just as well as other women.

In addition, vaccination during pregnancy resulted in higher antibody levels than a natural infection. This suggests that the vaccination could even provide more reliable protection. However, the scientists cannot yet say with certainty whether the antibody levels detected in the umbilical cord and breast milk are sufficient to ensure that the baby is also immune from Covid-19.

Why pregnant women are not vaccinated yet

“The excellent vaccine efficacy is very encouraging to pregnant and breastfeeding women who were not included in the initial vaccine studies,” said Andrea Edlow of Massachusetts General Hospital.

The Standing Vaccination Commission (Stiko) has only recommended vaccinations to pregnant women if they have a special, increased risk of a severe course of Covid-19. In order to protect pregnant women at least indirectly, their close contact persons have moved up in the vaccination sequence. Every pregnant woman in Germany can now name up to two people who then belong to group two for prioritization. However, these are far from being their turn in all federal states.

Many expectant mothers therefore remain unprotected – at a time when the virus is spreading among younger people.
In most cases, the mother’s infection is harmless to the fetus. Samples from the placenta, umbilical cord and blood from mother and child suggest that the virus does not always automatically infect the unborn child. Transmissions have only rarely been proven, according to an overview in the journal “Nature”. However, there are initial analyzes according to which the virus can attack the placenta – with possible consequences for the fetus.
Covid-19 in pregnant women
This is what the data says:

The fact that pregnant women have to be treated more frequently with infections in the hospital is also due to the fact that doctors are particularly careful with them. This effect is not only evident in diseases.

In 2014, a study from Canada concluded that pregnant women were more likely to be involved in car accidents. Doubts arose about her ability to drive. Should women with the positive pregnancy test hand in their car keys right away? A fallacy for two reasons: The evaluation clearly showed that even pregnant women still drive safer than men in the same age group. It is also obvious that pregnant women should be brought to hospital as a precautionary measure after an accident.

“Pregnant women should avoid getting infected”

However, caution alone cannot explain the frequent hospital admissions of pregnant women with Covid-19. Pregnant women are also more susceptible to other infectious diseases. There are several explanations for this: Pregnancy is also a challenge for the lungs because the mother and fetus have to be supplied with oxygen at the same time. At the same time, the growing belly presses against the diaphragm, one reason why many pregnant women are short of breath. In addition, the immune system of pregnant women does not work at full strength – so that it does not accidentally attack the unborn child.

During the 2009 and 2010 swine flu pandemic, pregnant women were at higher risk of premature or stillbirth if they became infected. Mothers-to-be who are infected with the flu also have to be treated more often in hospital.

The tricky thing about Covid-19: Some patients do not notice how bad they are actually doing. Despite threateningly low oxygen levels, they have no shortness of breath – that is why they are also referred to as “happy hypoxics”. The low supply of oxygen can be a problem for unborn babies. (Read more about this here.)

Pregnant women are also at risk because they are not allowed to receive all medication. Normally, people with severe Covid 19 would also turn on their stomach for better ventilation. This is not possible with pregnant women. “Pregnant women should avoid getting infected,” said Jeffrey Goldstein of Northwestern University in Chicago months ago. Panic, says the pathologist, is not appropriate. But be careful.

Police have identified 120 suspects after the night of the Stuttgart...

Influenza vaccines: Distribution of the “Bayern Reserve” to doctors

Child dies in Canary Islands after being rescued from refugee boat...

The Eintracht victory in Bielefeld in the analysis: Football 2021 |...

Werder Bremen: “Not backing a millimeter!” Voices on the game!