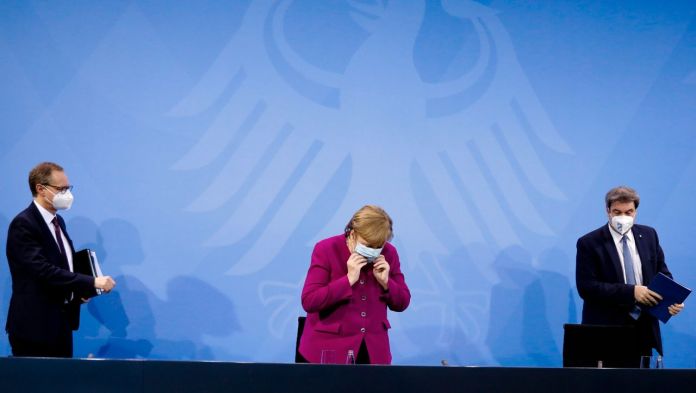 Do you remember? You remember, it was only three weeks ago and it was repeated often enough: 35 was the magic number. Only when the seven-day incidence of new corona infections was “stable” below this value did the Prime Ministers and the Chancellor decide, only then could the “next opening step” take place.
At the time of this landmark decision, the incidence of sevens was 68. Today it is 64, and the trend is rising. The 35 is out of reach, and it will remain so for the time being. Instead, the experts warn of the further spread of the much more contagious mutations, and the number of new infections could rise dramatically in the coming weeks.

And yet even Angela Merkel, previously known as the highest warning woman in the Bund-Länder group, speaks of the “transition into a new phase”. She doesn’t mean the dangerous virus variants, but the approaching spring. It should be different from spring 2020.

The lockdown is now being extended until Easter for the time being, but the trend is towards opening up: more schools, more daycare, more contacts, more retail. Further steps are in sight, Merkel’s 35 incidence can only be found in one place in the decision paper – that seems like a consolation, as if the federal states did not want to dup the Chancellor completely. Their goal is for the time being unattainable, so the countries are setting a new one: Even below 100, easing is now possible.
The longing for normal life is more than understandable. We all want our freedom back, today rather than tomorrow, we want to meet friends, go out to eat, go to concerts. We would have been closer to this life for a long time if politics hadn’t sent the country into the Corona winter so half-heartedly and hesitantly. And if the number of infections rose, politicians would have at least effectively used the possibilities with which the pandemic could be contained or at least better controlled.
Example vaccination: At first there was too little vaccine, now it is left lying around in some places. While other countries pull out the syringes in bars or at Ikea, we prefer to refer to a page-long vaccination ordinance. Now the family doctors should soon join in, but the fact that some countries such as North Rhine-Westphalia put the brakes on Wednesday does not suggest anything good for the implementation. The Chancellor promises to want to use “all flexibility” when vaccinating in the future, such as stretching the administration of the two doses as far as possible. There should also be a “clever replacement management”. Obvious question: why only now?
Example of rapid tests (Read more about it here): They were supposed to come on March 1st, free of charge for everyone, but the Chancellor took the promise made by her health minister because it could not be kept. Now every citizen should be entitled to one free test per week from next week (two were already planned). It is uncertain whether these will really soon be available nationwide. Especially since a task force for test procurement is to be established. Obvious question: why only now?
Missing ventilation systems in schools and daycare centers, digitization deficits in authorities and educational institutions, a corona warning app that cost millions but hardly brings anything – the list of failures could go on. And with every month that Germany struggles through this crisis, the impression grows stronger: This country is far too often simply too sluggish, too bureaucratic, too little creative.

Close or open, these are the unimaginative poles between which Merkel and the prime minister have been moving for months. Only now the logic of the previous crisis management is being undermined: although the number of cases is increasing, although the mutants are on the advance, although the vaccination rate is still too low and the test regime has not yet been established, it is being relaxed. Politics paradox.

People are tired of shutdowns, it is said, they need a perspective. The ladies and gentlemen who justify their actions in this way are well aware of the risky path they are taking. But feeling beats reason, politics surrenders.

You don’t seem to be quite at ease with it. It was noticeable how much Markus Söder emphasized the personal responsibility of the people after the deliberations. The message: If things go wrong, you’ve screwed up. It’s true: this March offers us great opportunities. To relaxations – and to a new, sharp lockdown.

Warm and safe in the old sports arena

Pete Buttigieg: The Minister-designate who reminds Joe Biden of his son

“Goodbye Germany”: What the Reimanns have on the account – people

Von der Leyen for Europe as a “continent of equal opportunities”

That is what Mercedes and Ferrari want

Government: One year in turquoise green