Germany unilaterally relied on vaccinations against Corona and did not support the development of drugs against Corona. That could turn out to be a fatal wrong decision

The corona virus is mutating globally and is being introduced in this country in ever new variations faster than the vaccinations are carried out in Germany. The development of drugs against corona is much worse than that of vaccine development.

The EU now intends to accelerate the approval of drugs against corona. Parallel to vaccine management, the aim is now to work with manufacturers to advance the development of suitable drugs. A concrete timetable does not seem to be available yet.

The Californian Milken Institute lists over 200 preparations that are currently being examined for their suitability against Covid-19. DocCheck, for example, offers an insight into the current German development landscape for Covid-19 drugs.

Which drugs against corona are approved in the EU?

Remdesivir from Gilead Sciences, Inc is an active ingredient that has been in clinical trials for over a year for the treatment of the disease Covid-19 caused by the Sars-CoV-2 virus. It has special approval in the USA, Japan and the EU. Originally developed against Ebola and Marburg fever, where it turned out to be unsuitable for therapeutic use, it has been marketed under the name Veklury for the treatment of Covid-19 since mid-2020.

Obviously, the drug is only successful if it is used within the first five days of a Covid infection. Patients whose data is continuously monitored, for example because they use a monitoring app that continuously informs their general practitioner about their current condition, can more easily be admitted to the hospital in good time for treatment.

However, there remains a certain degree of uncertainty with remdesivir, so that the WHO withdrew its recommendation to treat Covid-19 patients with the drug remdesivir on November 20, 2020.

What else is in the pipeline?

Unlike the vaccines that are given before an infection, drugs are used during an infection. At the moment, the main research focus is on drugs that are already known to be used in the treatment of other diseases. The hope of finding an all-encompassing drug against corona is limited. Different drugs are used in different phases of the disease, whereby it must be clarified which drug is suitable for which phase.

The University of Oxford has reported initial successes in treatment with the cortisone preparation dexamethasone. Details of the therapy are not yet known, only this much: It should help against severe Covid 19 disease and reduce the death rate.

The so-called antibody drugs contain antibodies produced in cell cultures against the spike protein of Sars-CoV-2. Eli Lilly relies on Bamlanivimab, Regeneron on two with the names Casirivimab and Imdevimab. They are designed to neutralize the virus by preventing it from entering cells. This procedure corresponds to that of the human immune system in the event of an infection or after a vaccination. The antibody preparations obviously do not help the seriously ill and are not approved for ventilated patients either. Treatment with antibody preparations in Germany has so far been possible on the basis of US approval.

With pentaglobin from Biotest in Dreieich, which has since been sold to a Chinese investor, a preparation enriched with immunoglobulin M (IgM) is now available, which is approved for the treatment of severe bacterial infections with simultaneous use of antibiotics. The antibodies contained in the preparation should be able to bind a large number of bacteria and thus support their elimination by the immune system.

What problems are there with the approval of drugs against corona?

While the development of corona vaccines was incredibly fast, there is little progress in the search for suitable drugs against Covid-19. It should be noted that the funding of drug development is significantly worse than that of vaccine development. Therefore, the relevant development teams are now also calling for support from the federal government.

The problem is evidently not in the development capacities, but mainly in the expensive approval-relevant studies, which are clearly overwhelming for small companies. The federal government is still hesitant to provide support for the particularly complex phase III. An obstacle that also existed in vaccine development with mRNA development, which in the past did not get beyond phase II. It was not until the market expectation in the case of Corona that investors were ready to finance phase III.

If neither the federal government nor the EU agree to help overcome the all-important 3rd hurdle, the alternative would be for established pharmaceutical companies to support the relatively small specialists, as in the case of Pfitzer / BioNTech, or to take them over completely.
(Christoph Jehle)

Good to know: An overview of the rules in the third...

Education – Frankfurt am Main – school start in the pandemic:...

Because of Corona in the hospital: Larry King down from intensive...

Republic of the Congo elects a president 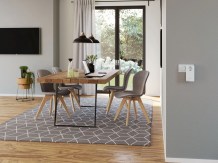