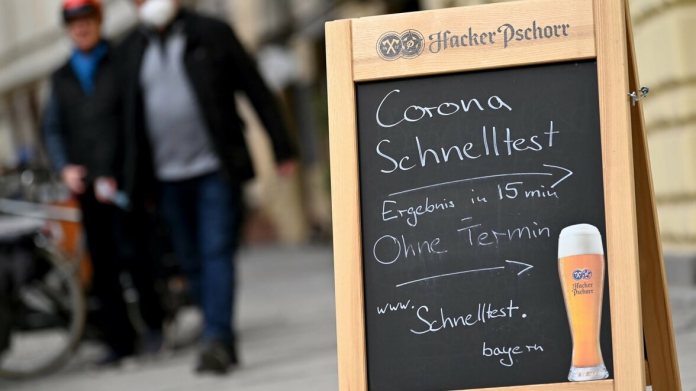 The RKI reports the current corona numbers on a daily basis.

This is what the figures look like according to the RKI dashboard in detail for the urban district of Munich (as of March 26, 21, 7:00 a.m.):

According to information from ZDF, the incidence in the Munich district has fallen by 4 percent compared to the previous week. In the city of Munich, the value increases by 34 percent. While the incidence in the whole of Germany is increasing by 28 percent. The ZDF live tracker calculates the rising and falling incidences according to the information provided by the health authorities and thus shows a trend.

Corona test station Munich: where can I get tested?

The city of Munich has set up a test station on Theresienwiese. After registering online in advance, you can be tested there.
The Association of Statutory Health Insurance Physicians also compiles a list of doctors who can also carry out a test.

All citizens in Munich are entitled to a free Corona rapid test per week. These are offered in pharmacies and private test centers. People without symptoms can get tested there. You can find out which pharmacies offer a free rapid test on a list provided by the state government.

Citizens can contact the Corona hotline of the City of Munich with any questions about Corona. They can be reached Monday to Friday from 8 a.m. to 4 p.m. on 089 233-96333.

Corona numbers Bavaria: The current case numbers of the RKI and LGL

If you want to be vaccinated against Corona in Bavaria, you have to register in the vaccination portal. As soon as it is your turn, you will be notified.

The city has also set up a vaccination telephone, where people in Munich who do not have access to the Internet can register by calling 089 90429-2222.

Corona vaccination Munich: so many people are vaccinated

The city of Munich will inform you of the vaccination status in the state capital. So many people in Munich are vaccinated (as of March 25):

According to the Berlin public prosecutor’s office, Attila Hildmann is in...

Vaccination: five or six doses of vaccine in the ampoule?

Mike Pence and Donald Trump: is the vice holding on to...

Leni Klum even looks so great in a casual baggy look!