9.45 am: In Germany, more than 20,400 new corona infections were reported within one day. As the Robert Koch Institute (RKI) announced on Saturday morning, citing information from the health authorities, 20,472 new infections were detected.

The RKI also reported 157 more deaths related to COVID-19 this Saturday. This means that 75,780 people have died in this country since the beginning of the pandemic. The number of Germany-wide corona infections is now a total of 2,755,225.

In view of the increasing number of infections, Chancellor Angela Merkel (CDU) and the heads of government of the countries agreed on the extension of the lockdown rules until April 18 at their Corona summit on Tuesday night. This means that the emergency brake decided at the beginning of March continues to apply, which is supposed to apply at an incidence value of over 100.

Federal Health Minister Jens Spahn (CDU) warned on Friday that if the number of Corona cases continued to rise unchecked, Germany would run “the risk that our health system will reach its limits in April”.

RKI President Lothar Wieler said there were “clear signals” that the third corona wave that has now started “can become even worse than the first two waves”.

The other corona news of the day:

09:21 am: To protect against new variants of the coronavirus, people in the UK are said to receive a third vaccination. Over 70-year-olds could get this “booster” vaccination as early as September, said State Secretary Nadhim Zahawi to the Daily Telegraph (Saturday).

Medical staff and nursing staff should then also receive their third dose within ten months. Eight different vaccines would likely be available by the fall, Zahawi said. “Whatever the virus, we’ll be ready.”

The State Secretary announced that drive-through vaccination centers will soon open. You could then be vaccinated in the car, for example. This should reduce the vaccination skepticism of younger people as soon as it is their turn, said Zahawi.

8:30 am: Brazil has again registered a daily high among the corona deaths. The Ministry of Health in Brasília reported 3,650 deaths related to COVID-19 in the past 24 hours on Friday evening (local time).

On Tuesday, Brazil recorded more than 3,000 corona deaths in one day for the first time. This increased the number of corona deaths to 307,112. More than 12.4 million people have been shown to be infected with the coronavirus. Only in the US are the numbers higher. Brazil has 210 million inhabitants and is 24 times the size of Germany.

The health system has collapsed or is collapsing in many places. Medicines, including those for intubating COVID-19 patients, are running out. As the news portal “G1” reported, citing the research facility “Fundação Oswaldo Cruz” (Fiocruz), recent data indicate an increase in the disease among younger people.

In view of the dramatic corona situation, the German air force is delivering 80 ventilators to the Amazon metropolis of Manaus. A transport plane is expected Saturday afternoon in the northwest of the largest country in Latin America.

Brazilian President Jair Bolsonaro played down the corona virus from the start. Most recently, the right-wing populist softened his tone a little – also with a view to vaccinations. The new health minister Marcelo Queiroga spoke of the “fatherland of masks” when he called for mouth and nose covers to be worn.

After the research institute “Instituto Butantan”, which is subordinate to the state of São Paulo, announced the development of a vaccine, the government now also wants to start production – it is having Preto developed at the University of São Paulo in Ribeirão.

Spahn asks citizens questions about Corona via the Internet

8:00 am: Federal Health Minister Jens Spahn (CDU) will answer questions from citizens about the vaccination situation, rapid tests and other topics relating to the corona pandemic on Saturday (2:00 p.m.) via the Internet.

The Tübingen emergency doctor Lisa Federle is also there. It is considered to be the driving force behind the model test in the Baden-Württemberg city – with opening steps and intensified tests.

Questions can be entered in advance on the homepage using an online form. Anyone who would like to bring their concerns live into the conversation can add their name with telephone number and email address.

More on the topic of coronavirus:

With material from dpa, afp, sid and apa.

Great hopes are placed on them in the pandemic: Corona self-tests, which should soon be available nationwide in Germany. We show how the tests are carried out and what to watch out for.

Seven-day incidence drops below 75 for the first time in three...

Jenke makes a crazy beauty experiment – the result is fatal

Donald Trump’s luxury hotel in trouble – and nobody wants his... 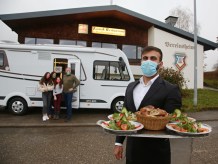 “Motorhome Dinner”: Food from the Konak restaurant in Rommelshausen straight to...

Handball: Germany defeated Austria well before the start of the World...

Why the corona virus is particularly raging in California