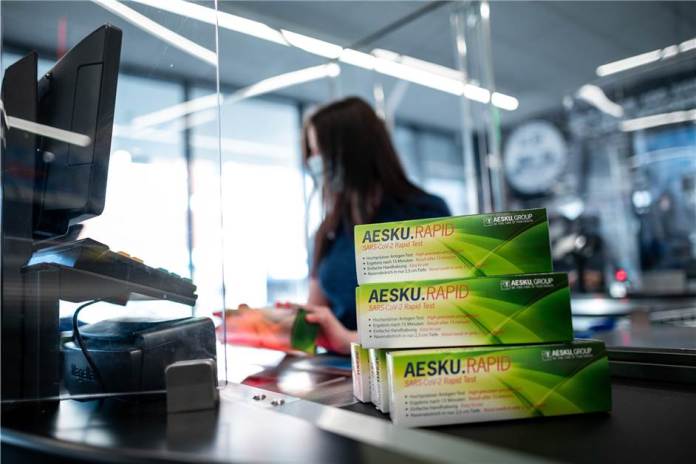 The rush in the branches is huge, Aldi has initially limited the delivery to one pack per customer. The tests are only available at the checkout. One pack costs around 25 euros and contains five tests. The result is available in 15 minutes after a nasal swab. The sensitivity, i.e. the detection rate, should be 96 percent. The branches usually open at 7 a.m. on Saturday.

In Dortmund Customers waited in front of the markets before the store opened and still had bad luck. The number of units delivered could not even begin to satisfy the demand.

In Selm the corona rapid tests were sold out just four minutes after the store opened. However, the local Aldi branch had only received ten tests.

A similar picture presented itself in Werne. Some customers had to go home disappointed and without a test, even though they had already queued before the store opened.

The discounter had 14 quick tests in Schwerte provided. They were also sold out shortly after the store opened.

In Dorsten people came straight from the night shift to stock up on the coveted tests.

In Ahaus After a few minutes, an information sign was hanging at the entrance to the Aldi supermarket. It says: “Unfortunately, the article Corona self-test is currently no longer available.”

Also in Unna, Holzwickede and Fröndenberg the stocks were out of stock after minutes. In some places only 12 tests were delivered, which were sold out after minutes.

Anyone who can no longer get a test at Aldi could be lucky in the next week at the drugstore chains dm and Rossmann. The drugstores want to start selling quick tests as early as Tuesday (March 9th) – albeit not that cheap. Lidl, Rewe and Edeka also want to offer quick tests soon.

Free tests should also be possible

Regular free corona rapid tests, which trained personnel in test centers or practices will carry out, are also expected to be possible for all citizens from next week. From then on, the federal government wants to assume the costs, as the German press agency learned from several sources from the consultations of the federal government and the states.

Hansi Flick talks about David Alaba and Boateng before the Augsburg...

Symbolic figure of the protest movement dies after being shot in... Astrazeneca: Thrombosis comparison to the pill is wrong